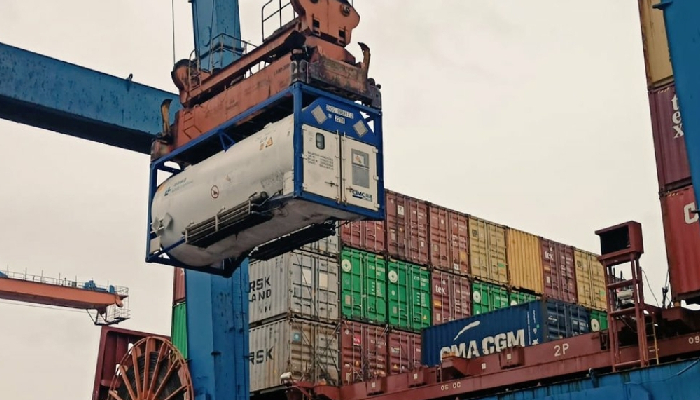 An oxygen tanker being unloaded in Colombo.

With three consignments in a week, India has now supplied 280 tons Oxygen to the island-nation

Supporting Sri Lanka’s fight against Covid-19, the 100 tons of Liquid Medical Oxygen (LMO) sent by India from Haldia arrived in Colombo on Thursday. This is New Delhi’s third consignment to the island-nation and a total of 280 tons have been sent in a week’s time.

The High Commission of India in Sri Lanka tweeted the arrival of 100 tons of oxygen from the Haldia port. The tweet said more oxygen supply is expected in the days and week ahead.

“And the supply continues!!! With the arrival of 100 tons of Oxygen from #Haldia today, a total of 280 tons came from #India to #SriLanka within one week. More expected in the days and weeks ahead,” said an India in Sri Lanka tweet on Thursday.

Earlier, as part of India’s commitment to support Sri Lanka’s fight against Covid-19 on 22 August, Indian Navy’s INS Shakti had reached Colombo with 100 tons of Liquid Medical Oxygen on board from Vishakapatnam.

Incidentally, a Sri Lankan Naval Vessel Shakthi with 40 tons of LMO on board had also commenced its journey from Chennai to Colombo around the same time as INS Shakti on 19 August.

Part of Operation Samudra Setu-II, deployment of the Indian Naval Vessel for the delivery of oxygen was in response to a personal request for assistance by Sri Lankan President Gotabaya Rajapaksa for urgent supply of Liquid Medical Oxygen, an Indian High Commission statement had said on Monday.

Promptly responding to the request by Sri Lanka, India had facilitated the speedy delivery of this big consignment onboard the 27,500T Naval Vessel, it stated.

The statement had further mentioned that Indian Navy’s assistance in this regard was discussed between the Chiefs of India and Sri Lanka Navy last week.

Indian High Commissioner in Sri Lanka had emphasized that the ‘Mission Sagar’ initiative of the Indian Navy has been a pioneering effort in supporting early delivery of essential COVID-19 shipments to friendly foreign countries in emergency whilst the formal supply chain is being restored, the statement noted.

Pointing out that more consignments of LMO are being scheduled to arrive in Sri Lanka, it stated that INS Shakti is carrying empty LMO containers back to Visakhapatnam towards ensuring continued supply of Oxygen from India to Sri Lanka.