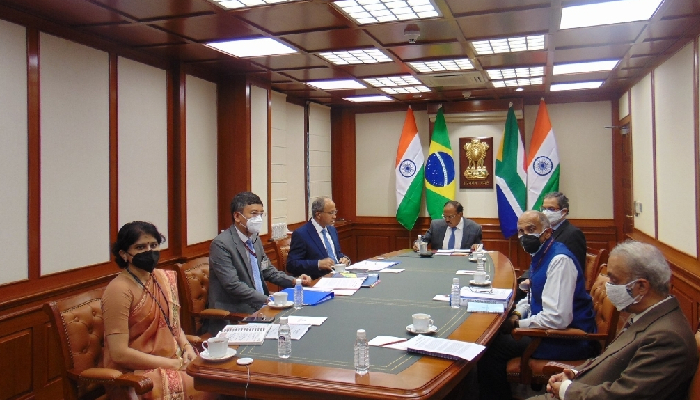 India, Brazil and South Africa have agreed to enhance cooperation in intelligence sharing

Cross-border terrorism undertaken through state sponsorship continues to be the most potent threat to global peace and security, National Security Advisers (NSAs) of IBSA countries have said.

This threat must be fought through united efforts, the national security chiefs of India, Brazil and South Africa agreed during discussions on Wednesday.

They were participating in the inaugural Meeting of the IBSA National Security Advisers hosted virtually by Indian NSA Ajit Doval.

During the meeting, discussions were held on maritime security, fight against terrorism and transnational organized crime, and cyber security, said a press release issued by India's Ministry of External Affairs (MEA).

Maritime security was identified as an important area of future cooperation.

It was agreed to strengthen mechanisms to combat piracy and drug and human trafficking and ensure security of sea lines of communication and energy and sustainable exploitation of marine resources, including fishing.

Kseoing this objective in mind, it was decided that the next round of the trilateral ‘IBSAMAR’ maritime exercise will be held at the earliest. India also invited Brazil and South Africa for the MILAN naval exercise in 2022.

According to the MEA, the meeting was convened as part of the preparatory process for the next IBSA Summit of Leaders which is scheduled to take place during India’s Chairship of IBSA.

The theme for India’s Chairship under Prime Minister Narendra Modi is "Democracy for Demography and Development”.

During Wednesday's meeting, India proposed cooperation among the defence industries based on respective strengths of each country and pooling of resources for joint development of platforms, including naval platforms.

Representatives of the three countries agreed to enhance practical cooperation in cyber security and accepted India’s offer to organise an Experts Group Meeting on Cyber Security. They also agreed to further strengthen coordination within the UN on cyber and ICT issues.

The meeeting reflected the importance of closer cooperation among the three countries to meet growing political and security challenges in the world, the MEA release pointed out.

India, Brazil and South Africa are three large developing countries located in three different continents bound by common values of democracy and pluralism. They are also all maritime nations.