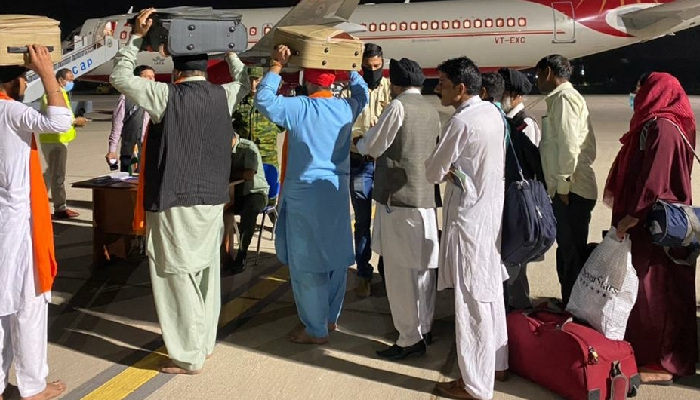 Continuing with its evacuation drive to bring back citizens safely and securely from Afghanistan, India on Tuesday brought back 78 people including 25 Indian nationals from Kabul via Dushanbe as part of Operation Devi Shakti.

Tweeting of the return from Kabul of the AI 1956 airplane, MEA Spokesperson Arindam Bagchi announced the safe return of 78 passengers including 25 Indian nationals who were flown in from Kabul on an Indian Air Force Aircraft to Dushanbe and thereon bought back to Delhi on an Air India plane.

“Helping in the safe return from Afghanistan. AI 1956 enroute to Delhi from Dushanbe carrying 78 passengers, including 25 Indian nationals. Evacuees were flown in from Kabul on an @IAF_MCC aircraft,” Bagchi had said in his tweet.

The group that returned included Afghan Sikhs and Hindus, a day after they were evacuated from Kabul to the Tajik city. The group, along with 3 copies of Sikh scripture Guru Granth Sahib, was airlifted from Kabul to Dushanbe by an Indian Air Force transport aircraft.

More than 800 people have been evacuated since August 16, when India brought back the first group from Kabul.

On Sunday, an Indian Air Force special repatriation flight with 168 passengers onboard, including 107 Indian nationals, made its way to Delhi from Kabul.