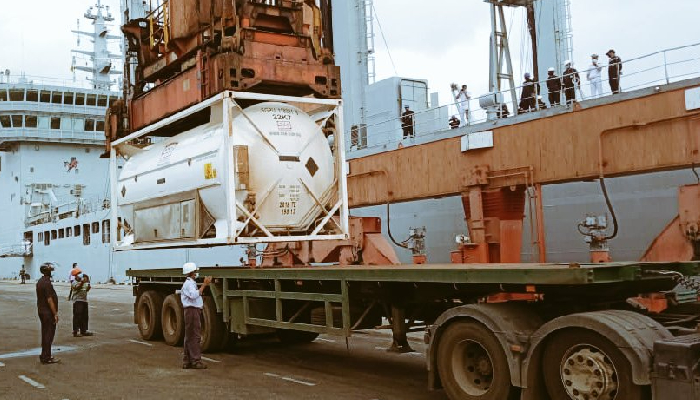 As part of India’s commitment to support Sri Lanka’s fight against Covid-19, Indian Navy’s INS Shakti on Sunday reached Colombo with 100 tons of Liquid Medical Oxygen on board.

Sri Lanka’s Ports Minister Rohitha Abeygunawardena was at the port in Colombo to receive the cargo and hailed India’s assistance to curb the coronavirus pandemic.

Named Operation Samudra Setu-II, deployment of the Indian Naval Vessel for the delivery of oxygen was in response to a personal request for assistance by Sri Lankan President Gotabaya Rajapaksa for urgent supply of LMO.

Samudra Setu-II is an initiative of the Indian Navy to undertake urgent shipments of LMO containers and associated medical equipment to various countries. Seven Indian Naval Ships were deployed for such missions earlier.

“Camaraderie and coordination between Navies and various other stakeholders in India and Sri Lanka were on display as Sri Lankan Naval Vessel Shakthi with 40 tons of LMO on board also commenced its journey from Chennai to Colombo around the same time as INS Shakti,” said a statement of the High Commission of India in Sri Lanka.

“It was a rare instance wherein two Shakti vessels commenced their journey from two different ports in India to the same destination almost at the same time for a common purpose,” it hailed.

In addition, another 140 tons of LMO from Haldia and Chennai ports are also expected to reach Colombo during the coming week, the statement noted.

India’s assistance to Sri Lanka during the pandemic has been varied and need-based in nature. Close to 26 tons of essential medical supplies were gifted in April-May 2020.

The first consignment of vaccines which was donated by India in January this year enabled Sri Lanka to roll out their vaccination programme ahead of schedule.

Under the Indian Navy’s Samudra Sethu, last year, stranded citizens from India and Sri Lanka were repatriated into their respective countries via INS Jalashwa.

Sri Lanka is one of India’s key partners under the latter’s ‘Neighbourhood First’ policy.

Trade and investment have grown exponentially and there is growing cooperation in the fields of development, education, culture and defence.

India’s overall commitment of development assistance to Sri Lanka stands at a total of around $ 3.5 billion and among these, $ 560 million is under grants.

In June this year, India extended US$ 100 million Line of Credit to Sri Lanka for solar energy projects. An agreement to this effect, between the Government of Sri Lanka and theEXIM Bank of India, was exchanged on June 16 in the presence of Sri Lankan President Gotabaya Rajapaksa.

Even amid the times of Covid-19, both sides have maintained bilateral cooperation through telephonic and virtual meetings.