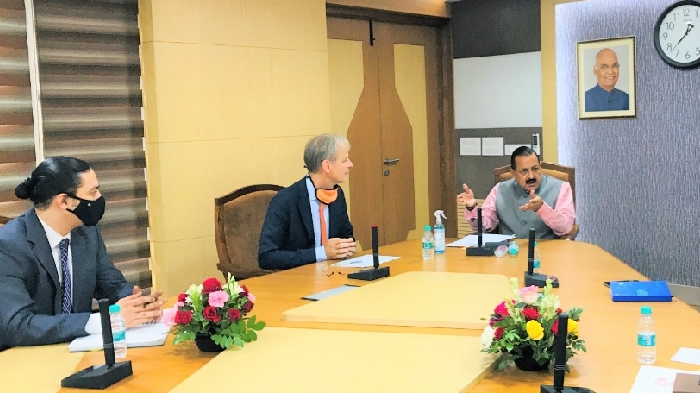 The Indo-Dutch collaboration could be evolved into a model for others to follow, the Union Minister said

The trinity of Health, Agriculture and Water has been the bedrock of close mutual collaboration between India and Netherlands for many years, Union Minister Jitendra Singh has said.

The Union Minister of State for Science & Technology emphasised Indo-Dutch collaboration in health and agriculture, which are the priority areas of the government headed by Prime Minister Narendra Modi.

Speaking to a delegation from the Netherlands led by Ambassador Marten van den Berg on Friday, Singh pointed out that the Indo-Dutch collaboration could be evolved into a model for others to follow.

The delegation had called on him to discuss and review bilateral cooperation between the two countries in the field of Science and Technology and Innovation.

According to an official press release, Singh welcomed the Dutch proposal to work together in the area of Green Hydrogen. He said that Prime Minister Narendra Modi in his address on 15th August, the 75th Independence Day of India, announced the “National Hydrogen Mission” to make India a Global Hub for Green Hydrogen Production and Export.

Similarly, Smart Energy Grids, Functional Materials, Big Data and IOT have been supported for joint research and development, he added.

Referring to Ambassador Marten vanden Berg’s proposal for collaboration in Ocean Resources, the Minister informed that the Union Cabinet had recently approved the proposal of Ministry of Earth Sciences (MoES) on the "Deep Ocean Mission". This aims to explore deep ocean for resources and develop deep-sea technologies for sustainable use of ocean resources with an estimated cost of Rs. 4077 crores.

Singh also invited Netherlands for fruitful exchanges in the Space sector particularly in the wake of path-breaking reforms initiated by India in the recent past allowing the private sector to have a level playing field in satellite launches and space based activities. The Minister said that Collaboration in Innovations must enhance our scientific economy as our challenges and priorities are similar.

The minister said that scientific technology will determine the status and contours of future Global Economy and India is poised to play a leading role in the comity of nations. He said India was emerging as a huge Investment Destination and called upon the private sector also to seize this opportunity for furthering ties in all walks of life as both the countries enjoy deep historic and cultural ties.

In his address, Ambassador Marten vanden Berg flagged future collaboration in Solar Energy, Gas-based installations, Cyber Security, Data Science, Urban Water System and emerging areas, which will create jobs for people in India. He said, Institutional frameworks for cooperation are already in place, and now there is a need to work effectively on ground.

He also highlighted Climate Change as a key area of concern for the entire World and said both India and Netherlands can work in areas like Carbon capture through Public-Private Partnership mode. He also underlined the need to address societal challenges through Science and Technology.

Collaboration in Sports Science is another area flagged off by both sides.