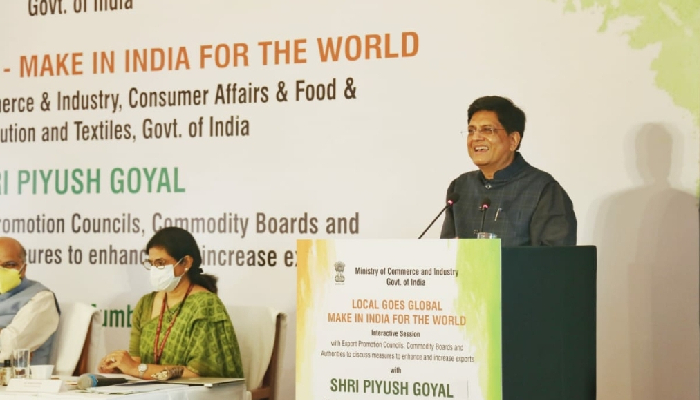 The country is working towards Early Harvest Agreements with the UK and Australia, Piyush Goyal said

Noting the progress of India’s Free Trade Agreements (FTAs) with several developed countries, Union Commerce and Industry Minister Piyush Goyal on Thursday said India is in a very positive momentum in terms of such pacts with the UK, EU, Australia, Canada, UAE, Israel and the GCC countries.

“Our effort is to ensure focus on countries where we have significant potential, where we can compete better and where market size is significant,” Goyal said.

The Minister was speaking at a meeting with Export Promotion Councils (EPCs), Commodity Boards and Authorities and other stakeholders in Mumbai to discuss measures to increase exports.

He said India is looking at identifying areas of immediate interest for India and the UK, and conclude an Early Harvest Agreement.

The Minister added that Australia has shown the highest level of engagement. It has shown significant interest to do an Early Harvest Agreement this will help us engage with others too on similar lines, he informed.

On the FTA with the EU, he stated that it is only due to the Prime Minister's goodwill and credibility that the EU has agreed to once again engage in negotiations for an FTA. India will be working very hard to speed this up, Goyal added.

“If the FTA with UAE happens, FTAs with GCC countries too will get expedited. The USA has kind of indicated that they are not looking at new trade agreements, however, we will work with them to address market access issues on both sides, this will be a big opportunity for our export sector,” Goyal explained.

He informed that the Free Trade Agreement (FTA) strategy is being revamped. Such agreements are being formulated in a much more interactive process, and are being done engaging with industry to ensure that FTAs are fairly and equitably crafted.

“At the same time, FTAs cannot be a one-way traffic, we also need to open our markets, if we want a larger share in foreign markets. So, we need to identify areas where we can withstand competition,” the Minister noted.

Informing that the nation is working towards making a quantum jump in merchandise exports, he said this has been made possible, thanks to the structural changes initiated by the government under the leadership of Prime Minister Narendra Modi.

He announced that two separate divisions are being set up in the Commerce Ministry focused on the services sector, in order to attain the $1 trillion services exports target.

The Union Commerce and Industry Minister said that the merchandise export target of $400 billion for the year 2021-22 has been set, in line with the Prime Minister’s clarion call, “Local goes Global: Make in India for the World”.

"The target has been generated through a bottom-up and consultative approach, wherein specific targets for each country, product, Export Promotion Council and foreign mission has been set", he highlighted.

The Minister exhorted all Export Promotion Councils to take immediate and effective steps to rise to the challenge of achieving the merchandise export target of $400 billion for 2021-22.

"We need to maintain the export momentum for the next 8 months, with $34 billion exports per month to achieve this target, he informed. The goal is ambitious, but possible if all including EPCs and their members work together", he said.