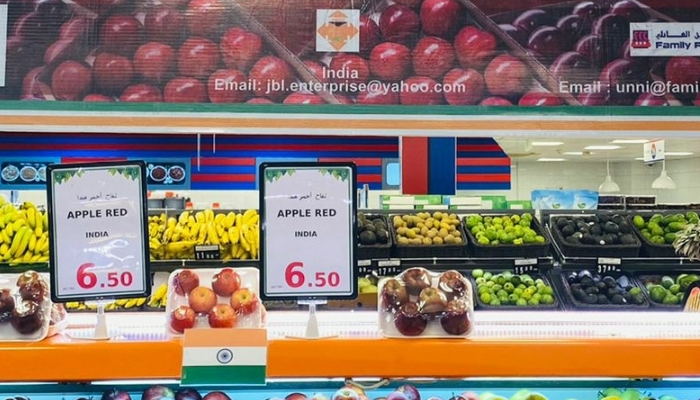 Apples from Himachal Pradesh displayed at a store in Qatar. (Source: Twitter @APEDADOC)

Despite Covid-19 restrictions, especially due to the second wave of pandemic witnessed during the first quarter of the current fiscal, India achieved a significant increase of 44.3 percent in export of agricultural and processed food products in the 2021-22 first quarter (April-June) in comparison to the corresponding period of 2020-21.

According to the Union Commerce Ministry, a huge jump in exports of agricultural and processed food products during the first three months of the current fiscal, is in continuation of growth in exports witnessed in the financial year 2020-21.

The WTO’s trade map states that with the total agricultural exports of USD 37 billion in the year 2019, India is ranked at 9th position in the world ranking.

The initiatives taken by Agricultural and Processed Food Products Export Development Authority (APEDA) under the Ministry of Commerce, has helped the country achieve this milestone at a time when the outbreak of pandemic was at its peak.

According to the Quick Estimates released by the Directorate General of Commercial Intelligence and Statistics (DGCI&S), the overall export of APEDA products has witnessed 44.3 percent growth in terms of USD during April-June 2021 over the same period of previous year.

However, it has been estimated that the country’s agri-export will register a positive growth of about 15 percent in the current year (2021-22) as well.

As per the Quick Estimates, the exports of fresh fruits and vegetables registered a 9.1 percent growth, while shipment of processed food products like cereals preparations and miscellaneous processed items reported a growth of 69.6 percent. In April-June, 2020-21, fresh fruits and vegetables were exported to the tune of USD 584.5 million which rose to USD 637.7 million in April-June 2021-22.

India reported a huge 415.5 percent jump in export of other cereals while the export of meat, dairy and poultry products witnessed an increase 111.5 percent in the first three months of the current fiscal (2021-22).

“The rise in export of agricultural and processed food products is the outcome of APEDA’s various initiatives taken for the export promotion of agricultural and processed food products such as organizing B2B exhibitions in different countries, exploring new potential markets through product specific and general marketing campaigns by active involvement of Indian Embassies,” the Commerce Ministry said.

The APEDA has also taken several initiatives to promote products having registered geographical indications (GI) in India by organizing virtual Buyer Seller Meets on agricultural and food products with the UAE and on GI products, including handicrafts with the USA.

The organization is continuing with the initiative of conducting Virtual Buyer Seller Meets (VBSM) with potential importing Countries to popularize the GI products of major agricultural commodities exported.

In order to ensure seamless quality certification of products to be exported, APEDA has recognized 220 labs across India to provide services of testing to a wide range of products and exporters.