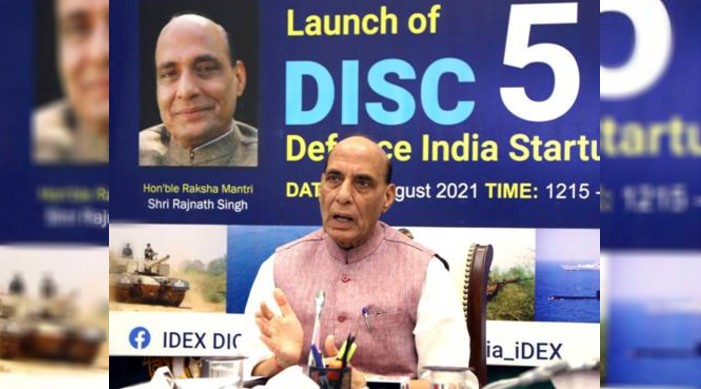 The Defence Minister called for taking innovation, design and development in the defence sector to newer heights

Defence Minister Rajnath Singh on Thursday underlined the importance of creating a strong, modern and well-equipped military and an equally capable and self-reliant defence industry, given the rapidly changing geo-political and security scenario in the world.

“Defence India Startup Challenge and Open Challenges provide many opportunities to our youth and entrepreneurs. They give a new direction to defence innovation and capabilities by highlighting the potential of India's science, technology and research”, said Rajnath Singh.

He added that iDEX4fauji is a similar initiative that gives an opportunity to the service personnel to showcase their talent in these fields.

Sharing his insights on the broad contours of iDEX, the Defence Minister said the initiative has succeeded in bridging the gap between talent and demand in the country.

“iDEX provides a strong foundation of innovation, R&D to the industry. Initiatives like iDEX form a link between our youth, academia, R&D, start-ups and the Armed Forces,” he added.

Rajnath Singh listed out measures taken by Ministry of Defence to promote innovation, such as including iDEX as a procurement avenue under Defence Acquisition Procedure (DAP-2020); earmarking Rs 1,000 crore for domestic procurement through iDEX for financial year 2021-2022 and approving a budget of Rs 498.8 crore for the next five years to support over 300 startups and foster innovation in defence and aerospace sectors.

Earlier, while lauding the efforts of iDEX-DIO, Rajnath Singh termed DISC 5.0 as another step towards independence in the defence sector as the launch comes at a time when the country is celebrating ‘Azadi ka Amrit Mahotsav’.

Stating that DISC 5.0 is a reflection of the government's resolve of creating an ‘AatmaNirbhar’ defence sector, he exuded confidence that this challenge will move forward from its earlier editions and take innovation, design & development to newer heights.

The Defence Minister shed light on the previous four editions of DISC and said that more than 80 startups, MSMEs and individual innovators have joined as winners in over 40 technological areas.

He added that modern and futuristic problem statements launched in DISC 5.0 demonstrate the confidence of young entrepreneurs and innovators in DISC.