‘Peacekeeping must be anchored in strong ecosystem of technology, innovation’: Jaishankar 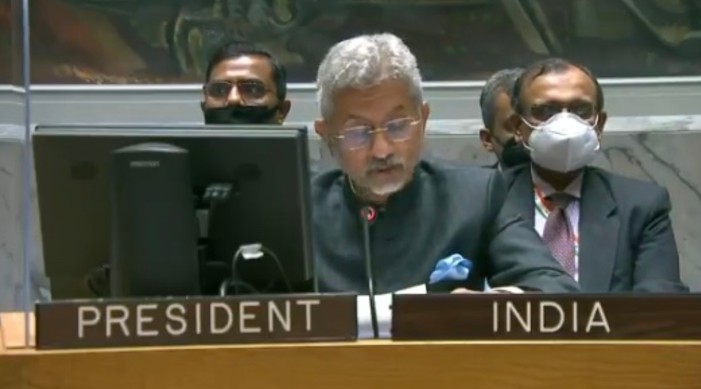 External Affairs Minister S Jaishankar on Wednesday has said that UN peacekeeping operations “must be anchored in a strong ecosystem of technology and innovation” to adapt to changing conflict dynamics.

During his address to the United Nations Security Council that unanimously adopted a resolution on ensuring accountability for crimes against UN peacekeepers for the first time during a meeting held under the Indian presidency, Jaishankar said, “21st century peacekeeping must be anchored in a strong ecosystem of technology and innovation that can facilitate UN peacekeeping operations in implementing their mandates in complex environments.

After all, it helps them to adapt to changing conflict dynamics and take advantage of increased efficiencies. This is also in line with the Strategy for Digital Transformation of UN Peacekeeping which seeks to advance the use of technology across the Action for Peacekeeping (A4P) themes, including performance, safety and security, politics, protection and peace building,” he said.

The resolution, adopted at an open debate chaired by EAM Jaishankar, calls for prevention, investigation and prosecution to bring to justice perpetrators of crimes against UN peacekeepers. It was initiated by India in the Security Council earlier this year and co-sponsored by all 15 permanent and non-permanent members of the body.

The Security Council also adopted the first technology-related presidential statement on peacekeeping — “Technology for Peacekeeping” — which called for recognising that “technology has the potential to act as a force multiplier”.

India has provided more than 250,000 personnel for 49 missions over the decades, and 174 of its troops have died during these deployments. Currently, more than 5,000 Indian personnel are deployed in nine missions.

The open debate with the theme “Protecting the protectors” was one of three signature events being hosted by India as part of its presidency of the Security Council. Prime Minister Narendra Modi chaired a virtual open debate on global cooperation for maritime security on August 9, while Jaishankar will chair a briefing on counter-terrorism on August 19 that is expected to discuss the situation in Afghanistan following the takeover of the country by the Taliban.

During the meeting, EAM Jaishankar proposed a four-point framework that lays out an architecture for securing UN peacekeepers from contemporary threats.

First, the EAM said that the UN must focus on operationally proven, cost-effective, widely available, reliable and field-serviceable technologies. “These must also prioritize mobility, both in the sense of agile manoeuvrability of mission assets and in the sense of use of mobile digital / IT platforms. Where deployed, technologies should be environment friendly through the use of renewables and fuel efficiency, and use of environmentally-friendly construction materials,” he said.

Second, the EAM said that we need a sound information and intelligence foundation as this will ensure early warning and mobilizing a coherent and early response. “A reliable, high fidelity means to collect, use, process and share information and data will create advantages from the very start of peacekeeping missions. Precise positioning and overhead visualization of mission environments is critically important to provide intelligence and enhance the safety and security of mission personnel,” he said.

The EAM announced with pleasure that India is supporting the UN in the rollout of the UNITE Aware Platform across select peacekeeping missions. This initiative is based on the expectation that an entire peacekeeping operation can be visualized, coordinated, and monitored on a real time basis.

“We should ensure that any attack on a peacekeeper or a civilian is predictable, preventable, or responded to immediately,” he said.

Continuing the four-point framework, thirdly he said, “We must contribute to ensuring that technological improvements are continuous and are available on the ground, in the gear that peacekeepers carry and the weapons and tools that they use to enhance their mobility, performance, endurance, range, and load-carrying capabilities while guaranteeing their safety and security. This also includes strengthening of communication within missions and enhancing overall capacity to take informed decisions at the tactical or operational level.”

And lastly, the EAM said that consistent training and capacity building of peacekeepers in the realm of technology needs attention and investment. “It is with this in mind that India is committed to long term engagement with the UNC4ISR Academy for Peace Operations in Entebbe, Uganda, to meet the training needs, link it with available technological capability, and shape future requirements. I am pleased to announce that we have signed an MOU between the Government of India and the UN in support of the 'Partnership for Technology in Peacekeeping' initiative and to the UN C4ISR Academy for Peace Operations (UNCAP),” he said.

Further, welcoming other Member States to take active interest in this evolving paradigm, Jaishankar said, “Political will, strengthened partnerships, and shifts in organizational culture are required to take it forward. Maximum transparency should remain a principle of the use of peacekeeping technology and in particular when used to enable information gathering and sharing. Peacekeeping requires continuous review, adaptation, and transparent engagement with all stakeholders, as also strong procedural safeguards and effective oversight mechanisms.