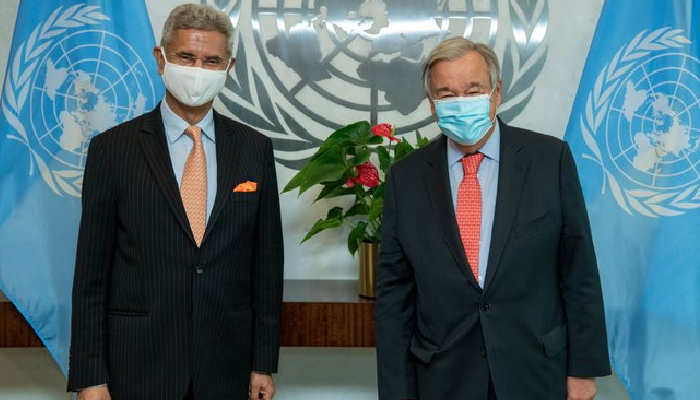 External Affairs Minister S Jaishankar who is currently visiting the UN on Tuesday discussed the ongoing situation in Afghanistan during his bilateral meetings with his counterparts from different countries and UN Secretary General Antonio Guterres.

Jaishankar arrived in New York on Monday as the UN Security Council held an emergency meeting on the situation in Afghanistan, the second time in just over the 10 days that the powerful UN body met under India’s Presidency for the month of August to discuss the unravelling situation in the war-torn country.

Following his meeting with Guterres in the UN headquarters on Tuesday, the minister tweeted, “Good to meet UN Secretary General @antonioguterres. Our discussions focused on Afghanistan, following upon the Security Council meeting yesterday.”

The EAM also met Estonia’s Minister of Foreign Affairs Eva-Maria Liimets and as “UNSC members, discussed our working together on maritime and cyber security and other global issues. Exchanged views on the developments in Afghanistan. Look forward to her presence at the Council meeting tomorrow."

Liimets described her meeting with Jaishankar as “important” and said in a tweet that they talked about the "uncertain" situation in Afghanistan and India’s first UNSC Presidency.

“Good cooperation between Estonia and India, this year celebrating 30 years of diplomatic relations,” she added.

Meanwhile, Jaishankar will chair two high-level signature events this week under India’s current Security Council Presidency. As India assumed the Presidency of the 15-nation Council for the month of August, it had outlined maritime security, counter-terrorism and peacekeeping as the focus areas.

The minister will chair an open debate Wednesday on technology and peacekeeping under the overarching theme of ‘Protecting the Protectors’.

He will lay a wreath at the Peacekeepers Memorial in a ceremony along with Guterres. India and the UN will exchange an MoU in support of partnership for technology in peacekeeping.

Jaishankar will also chair a high-level event on August 19 on counter-terrorism during which the Council will discuss the Secretary General’s six-monthly report on the threat posed by ISIL/Da'esh, under the agenda item ‘Threats to International Peace and Security caused by Terrorist Acts’.