Afghan territory should not be used by terrorists to attack any other nation: India at UNSC 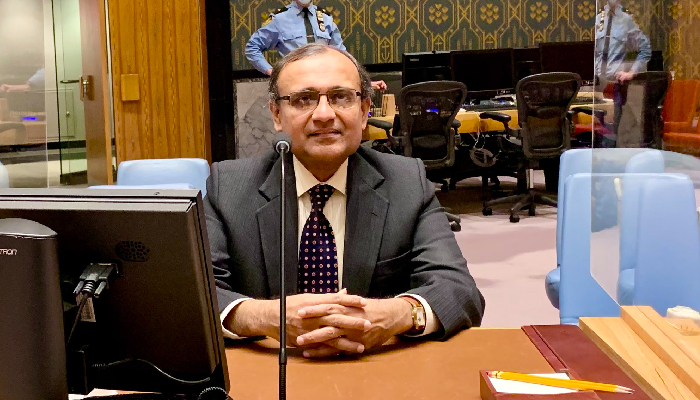 The UNSC needs to ensure an immediate cessation of violence, Ambassador Tirumurti said

India on Monday said that if there was zero tolerance for terrorism in all its forms and manifestations and it was ensured that Afghan territory would not be used by any terrorist group to threaten or attack any other nation, Afghanistan’s neighbours and the entire region would feel safer.

India’s Permanent Representative to the UN, TS Tirumurti made the statement while addressing a UN Security Council briefing on Afghanistan being held under India’s Presidency of the 15-member Council.

Noting that the Council is meeting for the second time in a period of ten days to discuss the situation in Afghanistan, Tirumurti said, in this short period of time “we have witnessed dramatic changes in the situation.”

“We have also seen very unfortunate scenes at the Hamid Karzai International Airport in Kabul. There is widespread panic among the people. Women and children are in distress. Incidents of firing have been reported from the city, including at the airport. While the security situation remains precarious, a grave humanitarian crisis is unfolding,” he stated.

“It is time for the international community, in particular, this Council, to act and ensure an immediate cessation of violence and contain any possible crisis and mitigate its consequences,” said the Indian Ambassador to the UN.

“As a neighbour of Afghanistan and a friend to its people, the current situation prevailing in the country is of great concern to us in India. Afghan men, women and children are living under a constant state of fear. They are uncertain about their future,” Ambassador Tirumurti added.

Stating that India has contributed significantly in recent years to the development of Afghanistan with ongoing development projects in each of its 34 provinces, he said that India’s emphasis has always been on the welfare and well-being of the people of Afghanistan.

Hoping that the situation stabilizes soon, and the parties concerned address the humanitarian and security issues, the Indian Permanent Representative to the UN said, it needs to be ensured that there is an inclusive dispensation which represents all sections of Afghan society.

“A broader representation would help the arrangement gain more acceptability and legitimacy,” he added.

Maintaining that Afghanistan has already seen enough bloodshed in the past, Tirumurti said it is time for the international community to come together unitedly, rising above any partisan interests, to support the people of Afghanistan in their desire for peace, stability and security in the country and to enable all Afghans, including women, children and minorities to live in peace and dignity.