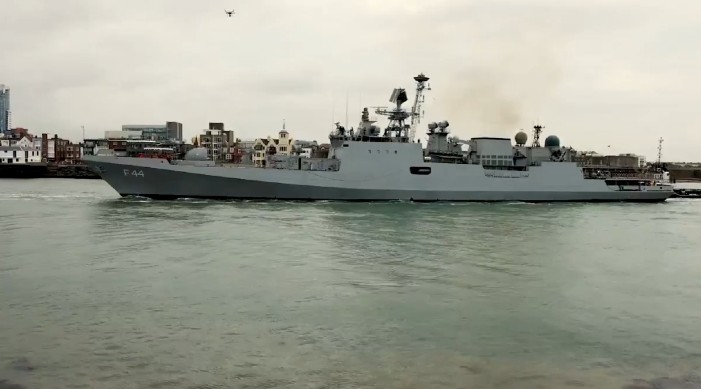 INS Tabar is participating in the bilateral Exercise Konkan 2021 between the Indian Navy and Britain's Royal Navy in the UK to enhance military cooperation between the two sides.

It commenced Exercise Konkan 2021 on August 12 with a maritime interception exercise with HMS Westminster off Portsmouth before it's arrival in harbour.

The naval drill will be continued after the departure of Tabar from Portsmouth on Monday, the Ministry of Defence said on Sunday.

On entering harbour, the Final Planning Conference for Exercise Konkan 2021 was held in non-contact form between the Ops Teams of Tabar and Westminster.

As part of the harbour engagements of Exercise Konkan 2021, a number of professional interactions were held between the two sides on 13 August 2021.

These included Subject Matter Expert (SME) exchanges on electric propulsion, unmanned surface vessels and electronic navigation. A visit to the Joint Maritime Security Centre at Potsdown Hill was also held for a team from Tabar.

On August 8, in a landmark first for the Indian Navy, INS Tabar participated in a Maritime Partnership Exercise with the Royal Norwegian Naval Ship HNoMS Storm, a Skjold class FAC (M).

On 29 July, INS Tabar had travelled to Stockholm, Sweden on a three-day goodwill visit. It also conducted a Partnership Exercise at sea with the Swedish Navy on departure from Stockholm.