India’s rightful place in world will depend on how youth’s strength gets harnessed: F S Shringla 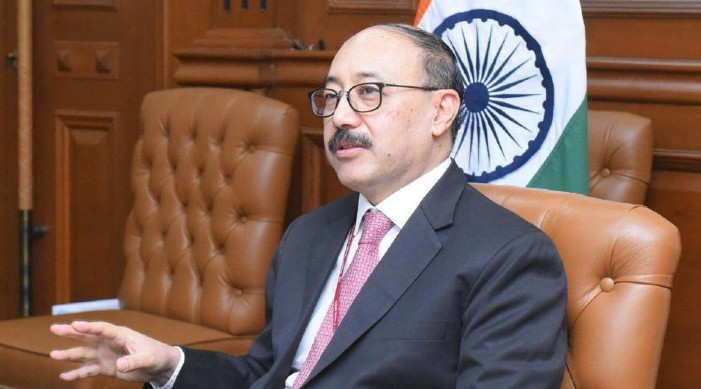 With youth constituting over 60 percent of India’s population, this demographic shift has the potential to yield a rich dividend

Foreign Secretary Harsh Vardhan Shringla said India’s ability to find its rightful place in the world will depend on how the country harnesses the strength of its young population.

At the Ministry of External Affairs, Foreign Secretary Shringla said the Ministry has undertaken a series of initiatives that will allow critical young minds to contribute to the nation’s foreign policy making process. The Foreign Secretary was speaking at the Observer Research Foundation’s “Foreign Policy Survey 2021,” on August 15.

He said the MEA accords high priority to engaging academics in universities and think tanks and utilising their expertise in the preparation of research papers and policy briefs on foreign policy issues.

The Ministry also supports universities, think tanks and academic institutions for the conduct of national and international seminars and thematic conferences on a regular basis, the Foreign Secretary said.

He also informed that the MEA started working with scholars in 2015 on certain specific areas of expertise.

The Foreign Secretary said the Ministry has revamped internship program. “We have devised a procedure to ensure participation from every State and Union Territory in the country, while encouraging a healthy gender balance,” he said.

“Selected interns will have a unique opportunity to work on a desk of their choice in the Ministry of External Affairs, along with suitable mentorship and guidance. The program is intended to provide first-hand exposure to the functioning of the Ministry, conduct of diplomacy and foreign policy,” Shringla added.

He said through the MEA’s ‘SAMEEP’ initiative, young Foreign Service officers are encouraged to reconnect with their educational institutions and share their experience with students on contemporary and popular foreign policy themes.

The Foreign Secretary said that the Ministry has also reached out to the strategic community at all levels.

“I have spoken extensively on the contours of India’s foreign policy at various events organised by think-tanks, universities, academic institutions, public forums and industry associations,” he said.

The Foreign Secretary said in line with PM Modi’s vision of making India a hub for international education the Indian Council for Cultural Relations (ICCR) provides more than 3000 scholarships to foreign students every year. “The ICCR has also established various Chairs in foreign universities in different Indian disciplines and is in the process of setting up Chairs of neighbouring countries in premier Indian institutions.,” he said

The Foreign Secretary further informed that this year, “the ICCR and the Delhi University set up the first academic Chair on Bangladesh in India, in honour of Bangabandhu Sheikh Mujibur Rehman, father of modern Bangladesh, and to commemorate the 50th Anniversary of the Bangladesh Liberation War and India-Bangladesh relations.”