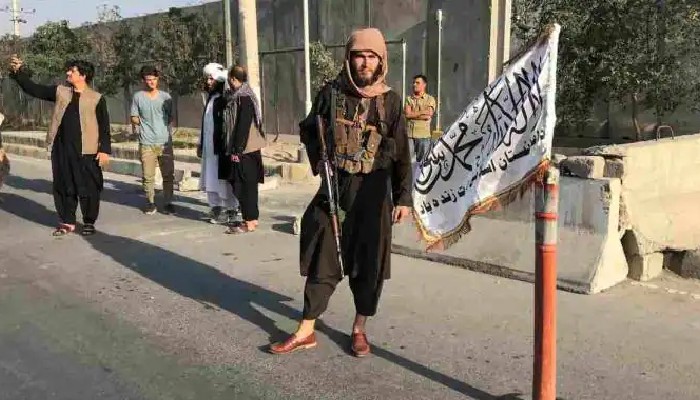 Taliban patrolling Kabul after president Ashraf Ghani and his top ministers fled the country on Sunday.

Fear and insecurity stalk every nook and corner of Afghanistan after the Taliban’s complete take over of the war-torn country, bringing with this an abrupt end to a two-decade long campaign in which the United States and its allies had tried to transform that country.

In fact, the first day of what the Taliban calls the “Islamic Emirate of Afghanistan” saw Kabul, a bustling metropolis of six million, turn into a slow city without police or traffic controls and with shuttered businesses everywhere.

AlJazeera reported that Kabul was jam-packed with cars and hundreds of people lining up outside banks, visa processing offices and travel agencies 48 hours earlier and now has come to a near standstill.

In another update, Kabul's international airport has been closed to commercial flights as military evacuations continue, senior US military officials were quoted as saying by AP.

The suspension of commercial flights cuts off one of the last avenues to escape the country for Afghans fearful of Taliban rule. The officials spoke on condition of anonymity to discuss ongoing operations.

The situation is such that the talks between the Taliban and the Afghan government on a political understanding that could lead to a peace deal, backed by the United States and its allies, have failed to make significant progress.

All those who worked for a democratic Afghanistan for the last 20 years under the leadership of the US are going to face a major setback. This includes not just NATO allies of the US, but also India.

The process of the Taliban taking over Afghanistan began a few weeks back. Today, the strategic environment surrounding Afghanistan is very different from the 1990s and 2001. The Taliban are likely to take over with full recognition from major powers, including the US, China, Russia and the European Union.

The situation in Afghanistan has created a ruckus at the global level, causing the major powers to take quick actions.

In the meanwhile, the United Nations Security Council will hold a meeting on Monday to discuss the situation in Afghanistan. The White House has said that US President Joe Biden and Vice President Kamala Harris met with their national security team and senior officials to hear updates on the drawdown of the country's civilian personnel in Afghanistan, evacuations of SIV applicants and other Afghan allies, and the ongoing security situation in Kabul.

The United Arab Emirates has suspended Emirates and 'flydubai' flights to Afghanistan from Monday until further notice, an airlines spokesperson has said.

India has also released an official statement informing that all the commercial operations from Kabul airport have been suspended today forcing a pause in the country’s repatriation efforts.

Ministry of External Affairs Spokesperson Arindam Bagchi informed that India is in constant touch with the representatives of Afghan Sikh and Hindu communities.

“We will facilitate repatriation to India of those who wish to leave Afghanistan. There are also a number of Afghans who have been our partners in the promotion of our mutual developmental, educational and people to people endeavours. We will stand by them,” he said.

Further, the MEA spokesperson said, “The Government of India has been closely monitoring all developments in Afghanistan. We have been issuing periodic advisories for the safety and security of Indian nationals in that country, including calling for their immediate return to India. We had circulated emergency contact numbers and had also been extending assistance to community members. We are aware that there are still some Indian nationals in Afghanistan who wish to return and we are in touch with them.”

While efforts are being made to maintain peace at a faster pace, the situation on ground seems deteriorating every other moment.