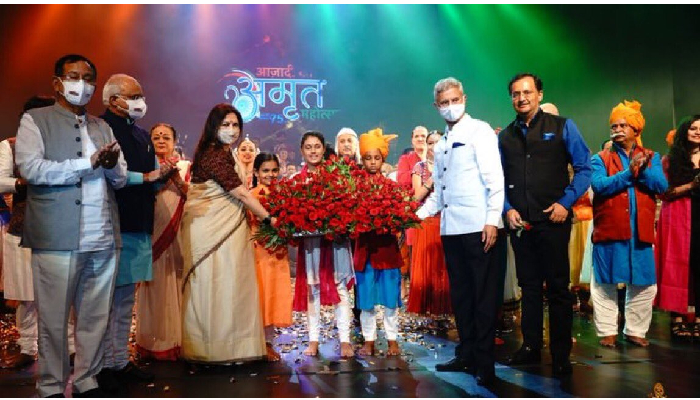 “Our 75th year as a free nation is also the starting point to envision where we will be on our centenary,” said EAM S Jaishankar

External Affairs Minister S Jaishankar said in the last 75 years, people of India have displayed collective commitment to create a vibrant democracy and a modern economy.

The EAM said this while inaugurating ''Azadi ka Amrit Mahotsav'' on Friday ahead of India's 75th Independence Day, organised by the Indian Council for Cultural Relation (ICCR) in Delhi.

“As the tricolour unfolds at the Red Fort this 15th August, we will be marking a historic milestone in the journey of a civilizational state towards a contemporary nation. This is certainly a moment for celebration; but equally one for introspection and renewed resolve,” Jaishankar said.

“In the 75 years that have passed, we, the people of India, have displayed a huge collective commitment to creating a vibrant democracy, a modern economy and an energetic civil society. To that end, we have drawn on the efforts of untold and often unknown freedom fighters, as also masses of citizens who nurtured their spirit. We, therefore, pay homage to those whose sacrifices make our tomorrow possible,” he added.

The EAM further noted that in this period, along with India, the world has changed profoundly. Significant shifts - starting with the economy and extending to politics, to culture and to other domains – have driven a rebalancing process that is creating a multi-polar world, he said.

“In such a reality, the capabilities, the influence, in fact, the very personality of our nation has a growing impact on the world order. This ability to shape global developments through an optimal mix of hard and soft power constitutes the essence of our diplomacy today. And, we can embark on that now with much greater confidence than ever before,” the EAM said.

The EAM said that it was inevitable that once democracy struck deeper roots in India, that the authentic voices of our society would find expression.

“We see that every day at home in a variety of ways. As a result, our heritage, traditions and practices are once again getting the recognition that they have long deserved. The celebration of the International Day of Yoga is symbolic of that development. This anniversary, of course, offers us an opportunity to present to the world many other facets of our rich and diverse culture,” he said.

The EAM pointed out that as we approached this momentous anniversary, India too was severely tested by the Covid pandemic. Under the leadership of Prime Minister Narendra Modi, our people responded courageously not only at home, but stood with others abroad as well.

While concluding the address, Jaishankar said, “Our 75th year as a free nation is also the starting point to envision where we will be on our centenary. The bold transformations at home will give us an increasingly salient role in the international system.”

“As a democratic polity, a pluralistic society, an innovative economy and as a culture of unmatched diversity, our contributions have a real weight and value. Our ability to harmonize tradition and modernity stands out in particular. Already, India is perceived as a first responder, a climate action leader, the pharmacy of the world, a reservoir of talent and as a reliable development partner,” he added.