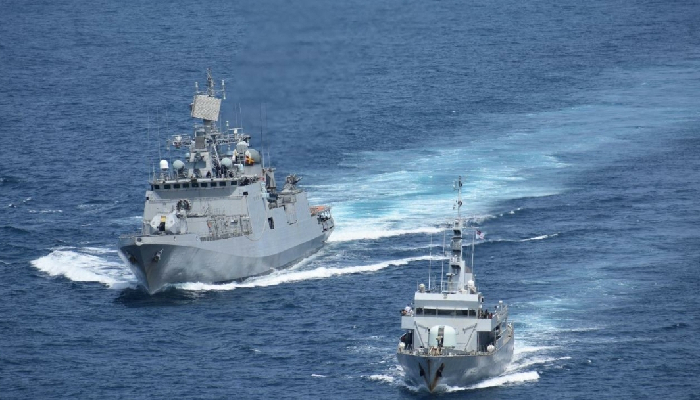 Basic manoeuvring exercises were undertaken by the ships to enhance interoperability

“Post conclusion of exercise Cutlass Express 2021, INS Talwar undertook a Maritime Partnership Exercise with a Kenya Navy Ship Shujaa, an Offshore Patrol Vessel, on 07 Aug 21,” said a statement of the Ministry of Defence on Tuesday.

Basic manoeuvring exercises were undertaken by the ships to enhance interoperability and strengthen maritime cooperation, it added.

The statement noted, on completion of the exercise, INS Talwar thanked Kenya Navy for hosting them at Mombasa and KNS Shujaa appreciated Indian Navy for ensuring maritime safety in the southern IOR especially, East Coast of Africa.

Earlier, INS Talwar reached Mombasa in Kenya where it participated in multi-countries Naval Exercise ‘Cutlass Express 2021’ from July 26 to August 6 along the East Coast of Africa.

The exercise is an annual maritime exercise conducted to promote national and regional maritime security in East Africa and the Western Indian Ocean.

The ship, during its stay at Mombasa, also hosted a number of events to build stronger bridges of friendships with Kenya, the Indian community and a host of other partners in addition to the Cutlass Express participants.

India’s commitment to the countries along the East Coast of Africa and the Western IOR is further going to be strengthened with the visit of INS Talwar and is in keeping with India's stated policy towards maritime cooperation in the Indian Ocean region and vision SAGAR (Security and Growth for All in the Region).