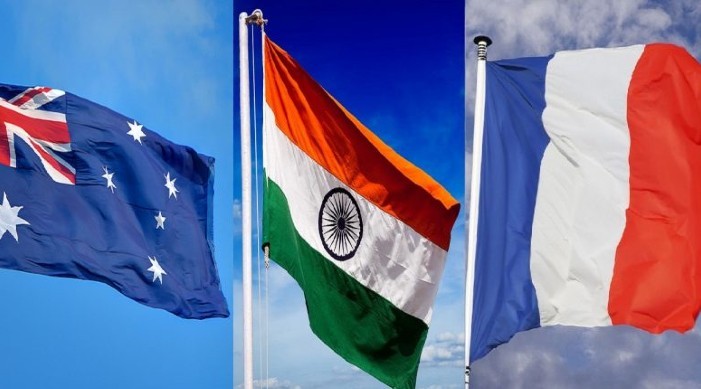 Flags of India, Australia and France; image for representational purposes

Trilateral-France, India and Australia-is all set to be elevated to leaders' level as President Emmanuel Macron, Prime Minister Narendra Modi and Prime Minister Scott Morrison are likely to meet on the sidelines of any major multilateral summit.

According to a WION report, the G20 summit in Italy in October could provide an opportunity for the meet.

The development comes almost a year after the group first met at the secretary level. In September 2020, the France, India and Australia trilateral was launched at foreign secretaries' level with maritime security, environment and multilateralism as three joint priorities.

In May, the first foreign ministers meeting took place on the sidelines of the G7 summit in London. Indian External Affairs Minister S Jaishankar, French Foreign Minister Jean-Yves Le Drian and their Australian counterpart Marise Payne met and discussed a number of issues.

The focus of the grouping has been largely on Indo-Pacific. Both France and Australia are part of the Indo-Pacific Oceans Initiative (IPOI) announced by India in 2019. In fact, Paris announced that it will join IPOI and take the lead of its 'Maritime Resources' pillar during the French foreign minister's visit to New Delhi in April 2020.

The mandate of the trilateral is being expanded. Ahead of the G20 FMs meeting in Italy, the trilateral had coordinated amongst themselves on a joint strategy at the forum.

Earlier, this year also saw the grouping having met at the senior officials’ level. The Indian side was led by Joint Secretary (Europe West) in MEA, Sandeep Chakravorty; French by Bertrand Lortholary, Director (Asia and Oceania), and the Australian side was led by Gary Cowan, First Assistant Secretary (North and South Asia Division).