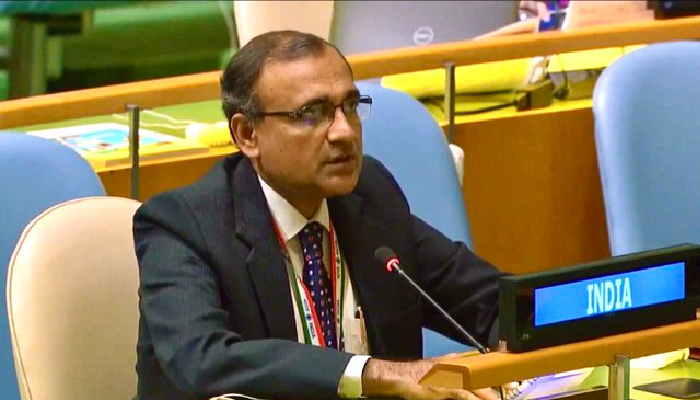 “As a neighbour of Afghanistan, the current situation prevailing in the country is of great concern to us,” said T S Tirumurti

India will continue to “stand with Afghanistan in ensuring peace and stability is restored” there, India’s Permanent Representative to the UN, Ambassador T S Tirumurti said at a Security Council meeting on Friday.

He stressed that the future of Afghanistan can’t be its past and that terrorist safe havens in the region must be dismantled immediately and terrorist supply chains disrupted. India’s Permanent Representative to the UN said in a thinly-veiled reference to Pakistan.

He emphasized that it is time for the UN Security Council to decide on actions to ensure immediate cessation of violence in that country.

“As a neighbour of Afghanistan, the current situation prevailing in the country is of great concern to us. The violence shows no sign of abating,” Ambasador T S Tirumurti said.

Such statements came before the UNSC, under the current presidency of India. The UNSC held a meeting to discuss the Afghan situation amid increasing military offensives by the Taliban as the US forces withdrew from the war-ravaged country.

He said the international community cannot afford to set the clock back. “The future of Afghanistan cannot be its past.”

“It needs to be ensured that Afghanistan’s neighbours and the region are not threatened by terrorism, separatism and extremism. There needs to be zero tolerance for terrorism in all its forms and manifestations,” Tirumurti said.

“It is equally important to ensure that the territory of Afghanistan is not used by terrorist groups to threaten or attack any other country. Those providing material and financial support to terrorist entities must be held accountable.”

Tirumurti said it is “time for the international community and, in particular, this Council to take stock of the situation, and decide on actions” that would help bring a permanent and comprehensive ceasefire and ensure an immediate cessation of violence.

“Anything short of this will constitute a serious threat to regional peace and security,” he said.

“Necessary to ensure that the Taliban engage in negotiations in good faith, eschew the path of violence, sever ties with al Qaeda and other terrorist organizations, and fully commit itself towards reaching a political settlement,” Tirumurti said.