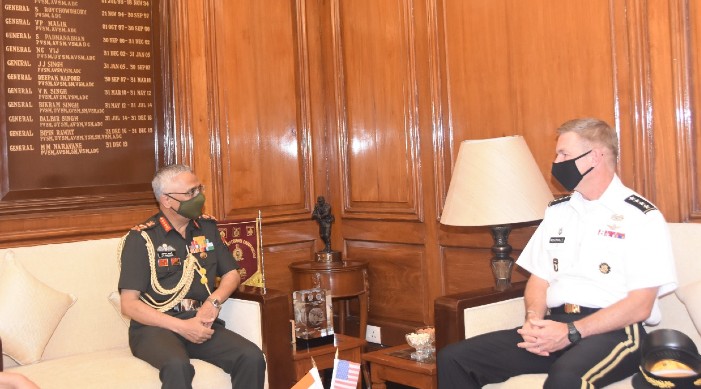 Chief of Staff of US Army General James C McConville who arrived in India on Wednesday on a two-day visit, met Indian Army Chief General MM Naravane and discussed issues of mutual interest. The US Army Chief is on August 4-5 visit to India.

“General James C McConville, Chief of Staff of the US Army called on General MM Naravane #COAS and discussed issues of mutual interest,” said a tweet of the Additional Directorate General of Public Information, IHQ of MoD (Army) (ADGPI).

Earlier in the day, the US Army Chief laid a wreath at the National War Memorial in Delhi and received a Guard of Honour.

“General James C McConville, Chief of Staff of the US Army is on a two day visit to #India. The General Officer laid a wreath at the National War Memorial #NWM and received a Guard of Honour at the #SouthBlock,” the ADGPI said in another tweet.

In May this year, Gen. McConville, who is the 40th US Chief of Staff, had a telephonic conversation with his Indian counterpart General MM Naravane.

Their talks had focused on bilateral military cooperation. They had also discussed ways to expand cooperation between the two armies in specific areas in view of the evolving regional security scenario.

The Indo-US defense ties have been on an upswing in the last few years and the US is supportive of an active role for New Delhi in the future political and security architecture of Afghanistan.

In October, 2020, India and the US had sealed the BECA (Basic Exchange and Cooperation Agreement), the last of four foundational agreements for strategic ties. The pact allows expanded geospatial information sharing between the armed forces of the two countries.