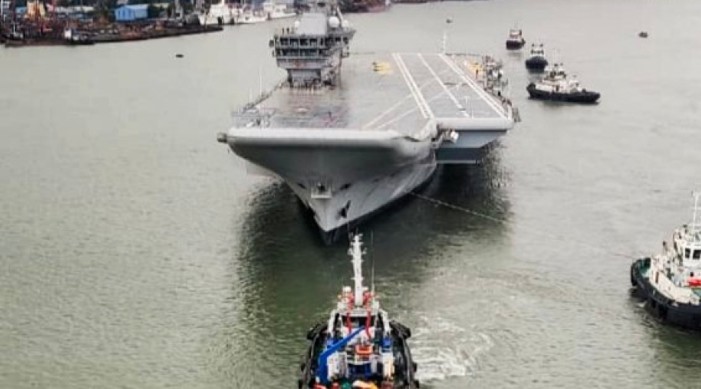 IAC Vikrant’s setting sails for maiden sea trials comes in the 50th year of her predecessor’s role in the victory in the 1971 Indo-Pakistan war.

“Proud & historic day for India as the reincarnated #Vikrant sails for her maiden sea trials today, in the 50th year of her illustrious predecessor’s key role in victory in the #1971war. Largest & most complex warship ever to be designed & built in India. Many more will follow...,” said a Twitter post of the Indian Navy.

Vikrant is the largest and most complex warship ever to be designed and built in India. It has an ability to operate MiG-29K fighter aircraft, Kamov-31 Air Early Warning Helicopters, the soon to be inducted MH-60R multi-role helicopter and the indigenously manufactured Advanced Light Helicopters.

It will offer an incomparable military instrument with its ability to project Air Power over long distances, including Air Interdiction, Anti-Surface Warfare, offensive and defensive Counter-Air, Airborne Anti-Submarine Warfare and Airborne Early Warning.

Earlier, in June, Defence Minister Rajnath Singh had said that India’s first indigenously built aircraft carrier would be commissioned as INS Vikrant in the first half of 2022.

To take first-hand account of the building of the ship, the Defence Minister visited the construction site of the Vikrant at Kochi in Kerala where he was briefed about the successful basin trials of the ship completed in November 2020.

“It is a proud historical moment for the quest for Atmanirbhar Bharat and Make in India Initiative,” the Ministry of Defence said in a statement.

The statement further said that, “Achieving this milestone despite COVID-19 challenges was made possible by dedicated efforts of all stakeholders.”