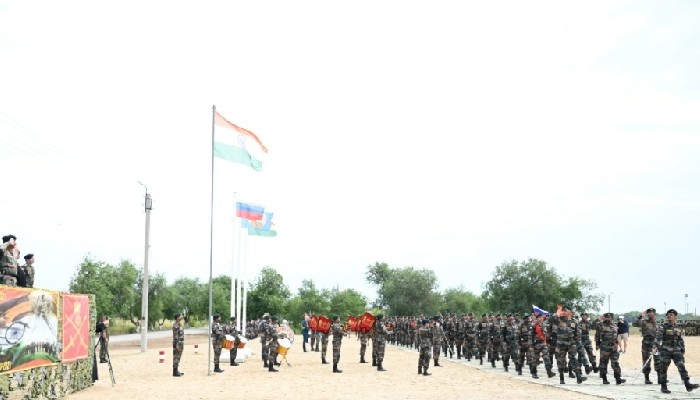 In a bid to further strengthen security cooperation between the two sides, India and Russia began their joint training Exercise INDRA 2021 at the Prudboy Ranges, Volgograd on Wednesday.

A contingent of the Indian Army had reached the Volgograd region of Russia earlier this week to participate in the India-Russia tri-services military exercise Indra-2021.

INDRA-21 began with an impressive opening ceremony that saw the unfurling of the National Flags of both countries, said a Ministry of Defence statement.

The aim of the exercise is to facilitate joint training between Indian and Russian Armies to jointly plan and conduct counter terror operations under the United Nations mandate.

The conduct of the exercise will also entail academic discussions between expert groups of both contingents.

The exercise will focus on unit level joint planning and conduct of anti terrorist operations and will include cordon and search operations, intelligence gathering and sharing, perception management, humanitarian laws and hostage rescue in simulated settings.

Exercise INDRA – 2021 will strengthen mutual confidence, interoperability and enable sharing of best practices between both the armed forces.

The Indra-2021 drills will involve about 250 servicemen of the armed forces of India and around 250 personnel of the Russian Army’s Southern Military District. The dates were decided at a conference of military representatives of Russia and India.

The exercise showcases the long-standing bond of India and Russia friendship and strengthens the relationship between the militaries of the two countries.

Defence cooperation is an important pillar of the India-Russia strategic partnership. It is guided by the Programme for Military Technical Cooperation signed between the two countries.

It enshrines the interest of the two governments to further develop and strengthen the military and technical cooperation in the sphere of research and development, production and after sales support of armament systems and various military equipment.

India and Russia have an institutionalized structure to oversee the complete range of issues of military technical cooperation.

The India-Russia Inter-Governmental Commission on Military Technical Cooperation (IRIGC-MTC), set up in 2000, is at the apex of this structure.