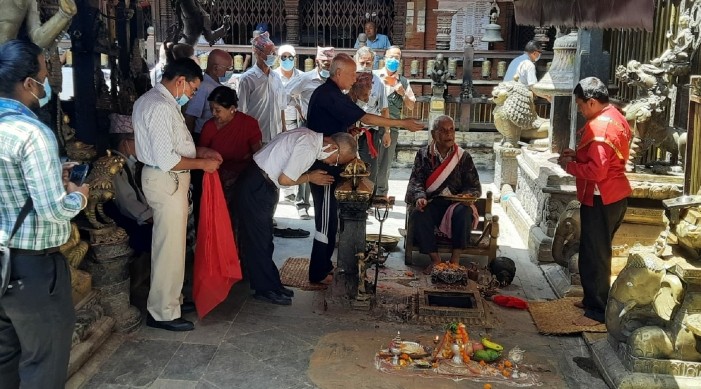 A special prayer marked the beginning of the reconstruction work.

The Mahavihar, popularly known as Golden Temple, is being reconstructed at a cost of Nrs. 181 million.

It is situated in the monument zone of Patan Darbar square, a UNESCO World Heritage site in Lalitpur, and is one of the most important Buddhist temple monasteries of Patan.

Seven cultural heritage projects are being reconstructed in Lalitpur district of which work on five projects are ongoing, the Indian Embassy said.

‘Chhema Puja’ was performed at Hiranyavarna Mahavihar and Digi Chhen temple by the local community as ritual of ‘asking forgiveness’ before the start of restoration work, said a press release by the Indian Embassy in Kathmandu.

The puja was attended by officials from Embassy of India in Kathmandu, Central Level Project Implementation Unit, Government of Nepal and INTACH Kathmandu.

The Mahavihar is one of the 28 cultural heritage projects being undertaken under India’s grant assistance of USD 50 million for Post-Earthquake Reconstruction and Rehabilitation of cultural heritage sites in Nepal.

All the 28 sites for restoration were identified by Government of Nepal and the two countries signed a MoU in this regard in August 2017.

Earlier, in March, reflecting the common heritage which has been the bedrock of strong and friendly historical linkages, India and Nepal signed a MoU for restoration of three cultural sites at a cost of Nepali Rupees (NR) 246 million.

In the same month, the two countries had also began the reconstruction of the Budhanikantha Dharmshala in Kathmandu.