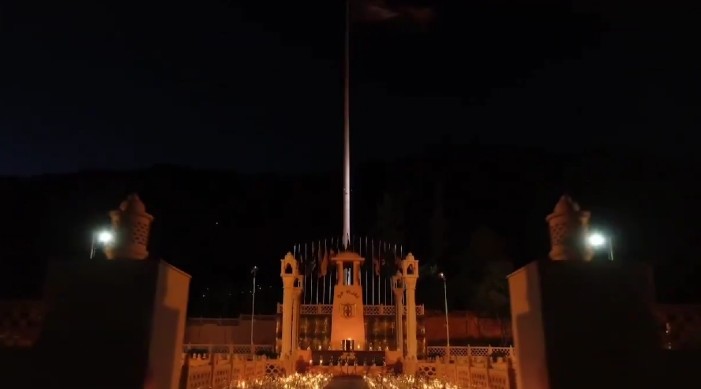 Candles lit at at the Kargil War Memorial in Dras. (Source: Twitter @adgpi)

The Kargil war is a symbol of valour which the entire world has witnessed, PM Modi says

Twenty-two years ago, on this day, India became victorious over Pakistan after more than 60 days of armed conflict on the highlands of Kargil in Ladakh.

“We remember their sacrifices. We remember their valour. Today, on Kargil Vijay Diwas we pay homage to all those who lost their lives in Kargil protecting our nation. Their bravery motivates us every single day. Also sharing an excerpt from last year’s ’Mann Ki Baat’” Prime Minister Narendra Modi said on Twitter.

President Kovind laid a wreath at the Dagger War Memorial, Baramulla, Jammu & Kashmir, to pay tributes to all soldiers who sacrificed their lives in defending the nation. He also interacted with officers and jawans of the Chinar Corps and High Altitude Warfare School, Gulmarg.

On this day every year, the Prime Minister pays his tributes to the armed forces at the 'eternal flame', Amar Jawan Jyoti, at India Gate in Delhi. Celebrations are also conducted in the Kargil sector and elsewhere across the country to commemorate the contributions of the Indian Army.

Defence Minister Rajnath Singh, along with the three service chiefs, paid tribute to the heroes of the Kargil War at the National War Memorial in Delhi on Sunday morning.

Northern Theatre Commander Lieutenant General YK Joshi, who is a Kargil war veteran and gallantry awardee, was seen leading a bike rally to the venue in Ladakh.

On the morning of July 25, a special event narrating the stories of Operation VIJAY was organized by the Indian Army at Lamochen near Dras, where an account of the epic battles on Tololing, Tiger Hill, Pt 4,875 and other prominent features was narrated.

A number of military personnel, including the gallantry award winners and families of Kargil War Heroes attended the event.

On the eve of Kargil Diwas yesterday, the epic battles of Tololing, Tiger Hill and others were recalled and 559 lamps were lit in a tribute to the martyrs at the Kargil War Memorial in Drass area of Ladakh. Events to mark the 22nd Kargil Vijay Diwas commenced on Sunday in the presence of top military officers, family members of the army personnel and others.

PM Modi on Sunday urged the countrymen to salute the brave hearts of Kargil on Kargil Vijay Diwas. Hailing the Indian armed forces, the Prime Minister said that the Kargil war is a symbol of valour and discipline of our security forces which the entire world has witnessed. He said that India will celebrate this day as 'Amrut Mahotsav'.

On July 26, 1999, India successfully took command of the high outposts. The Kargil war was fought for more than 60 days and ended on this day after the Pakistani army took advantage of the melting snow and - betraying the bilateral understanding of both the nations that the post would remain unattended during the winter season - took command of the high outposts of India.

As many as 527 soldiers from the Indian Armed Forces lost their lives during the war. They heroically fought for the nation, and the Kargil Vijay Diwas not only celebrates India's win but also pays homage to the fallen heroes who sacrificed their lives to make 'Operation Vijay' a success.

“The message conveyed then and valid even today is that India will not accept any loss of territory. Pakistan got the message then and China understood it with Ladakh and Galwan. Once India regained Kargil, Pakistan feared it could expand its operations and threaten POK hence requested the US to broker a ceasefire. Pakistan has yet to declare its true losses in Kargil. Many of their soldiers remain buried on the Indian side even today,” he added.