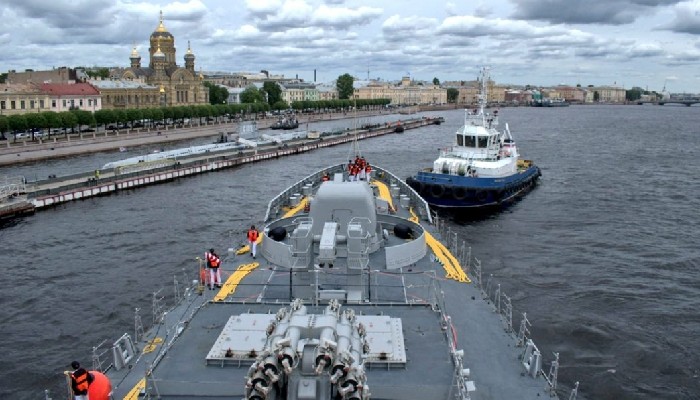 Commemorating the special bilateral relations between Russia and India that span several decades, Indian Naval Ship Tabar arrived at St Petersburg on Thursday as part of a five-day goodwill visit to Russia and to participate in the 325th Navy Day celebrations of the Russian Navy.

A statement of the Ministry of Defence said that during the Russian Navy Day Parade on Sunday, INS Tabar will join the column of ships that will be reviewed by the President of Russian Federation.

The Indian Naval Band embarked on Tabar will also participate in the City Parade during the celebrations. In addition, during her stay at St Petersburg, the crew of Tabar will participate in various bilateral professional interactions with the Russian Navy.

Following the interactions, INS will conduct bilateral naval exercises at sea with the Russian navy.

This will be part of the established series of naval exercises between the Indian Navy and the Russian Navy titled exercise INDRA.

The harbour interactions and the exercise at sea aim to consolidate the long standing ties between the two navies.

These interactions will also offer an opportunity for both sides to observe and imbibe the 'Best Practices' followed in each other's Navy.

INS Tabar is a Talwar-class stealth frigate and forms part of the Indian Navy's Western Fleet which is based at Mumbai under the Western Naval Command. Incidentally, the ship was built for the Indian Navy in Russia and was commissioned at St Petersburg in April 2004.

The ship is currently commanded by Captain Mahesh Mangipudi and has a complement of over 300 personnel. It is equipped with a versatile range of weapons and sensors and is among the earliest stealth frigates of the Indian Navy.