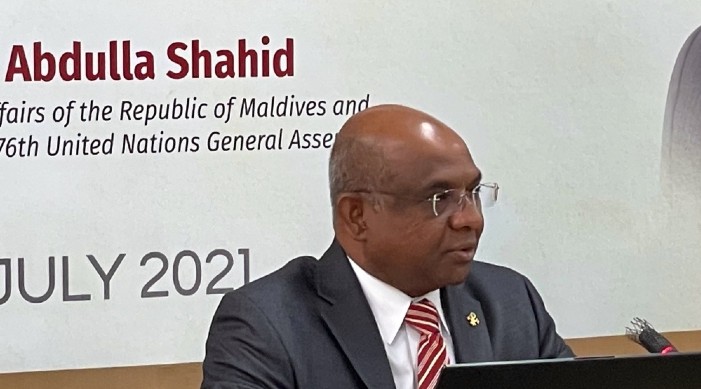 Abdulla Shahid delivering a lecture in New Delhi on Friday.

All United Nations members now agree on need for institutional reform of the Security Council, the PGA-elect said

Calling terrorism a ‘scourge’ and ‘pure evil’, President of the General Assembly (PGA)- elect and Foreign Minister of Maldives Abdulla Shahid on Friday called on the political leadership of the world to unite and come up with a comprehensive convention on terrorism.

“What we require now for the political leadership of the world to come together and the best message that we can send to the terrorists now is to come up with the Comprehensive Convention on Terrorism,” Shahid said.

He was delivering the 38th Sapru House Lecture titled ‘Presidency of Hope-76th UNGA Covid Pandemic and the Need for Reformed Multilateralism.

“Once we are at least able to agree on the definition of terrorism, then the terrorists would know, the United Nations and the world community has spoken that terrorists have no space in the world,” he stated.

“I would urge the membership of the United Nations to do their utmost to come together, this is a collective responsibility that has been tasked with us,” Abdullah added.

The PGA elect and Maldivian Foreign Minister is on a 3-day visit to New Delhi and is scheduled to meet Prime Minister Narendra Modi and External Affairs Minister S Jaishankar.

Deliberating on the topic of UN Security Council Reforms, Shahid said “talking about it brings to me the role that the Maldives has been playing in this very important effort at the United Nations.”

“Way back in the 1970s, you would recall that the 10 countries submitted a letter to the UN requesting for the inclusion of an agenda item on the reform of the Security Council,” he added.

“Maldives was one among the 10 countries who initiated this process at the United Nations. And to say that it is taking a long time is an understatement because perhaps when this letter was signed by Maldives and submitted, I was only 10 years old,” the PGA elect and Maldivian FM said.

“It also is a fact that the current political realities are not reflected in the membership of the United Nations Security Council. The 10 countries who initiated it, realized it in the 70s,” he noted.

“So many countries, and I would say the entire membership of the United Nations, now agree that there needs to be institutional reform of the Security Council, including the representation of new permanent members,” the Maldivian informed.

“The position on this has been made clear, many, many times by our leadership, including former governments, that the Maldives supports the bid of India to have permanent seat,” he stated.

However, he reminded that the process of the reform of the Security Council is a membership driven process. The inter-governmental negotiating process, has been ongoing, he added.

“I intend to appoint efficient, effective core facilitators to continue the work that has been carried out during the 75th session,” Shahid informed.

Recalling his last visit to Delhi this year, he said, “India was at the cusp of one of the most aggressive surges of COVID-19 anywhere in the world. But legendary resilience of the Indian people is once again shined through the enduring spirit of Indian people will most definitely lead this great country to overcome any challenge it faces.”

The Maldivian Foreign Minister and PGA Elect further said, “We also have full trust in the generosity of the Indian people around the world.”

Indian generosity has ensured that people in 95 countries have COVID-19 vaccines, essential medicines were gifted by India to more than 150 countries, he added, applauding the leadership of the country.

“If the 75th session was about confronting COVID-19 I want to make the 76th session about recovery,” Shahid said.

“This is why the team I have chosen for the general debate of the 76th session of the General Assembly focuses on looking forward on building resilience with hope is a driving force," he explained.

"My immediate priority will be recovering from COVID-19. The impacts have been immense and yet still, this pandemic seems to be far from over, new variants are emerging. And we are still unclear about the long term health consequences," he added.

“The United Nations can and must do more to address this. Building on existing initiatives and approaches. I will be looking to address the health of our people and our economies and work to ensure vaccine equity, we need to vaccinate the entire world. No one is safe until everyone is safe.

Together, we need to overcome the challenges that we face in vaccinating the world, he emphasized.