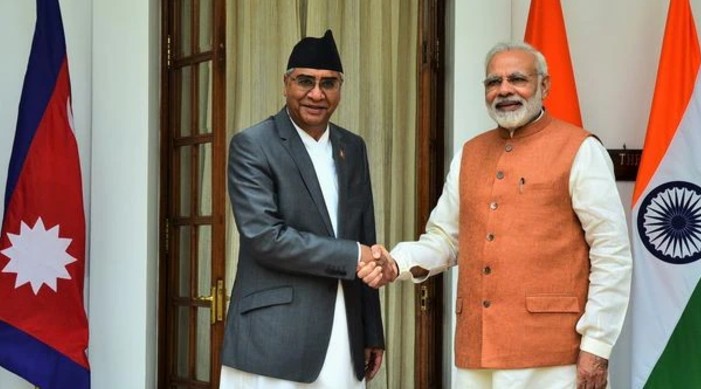 Nepal’s newly appointed Prime Minister Sher Bahadur Deuba has said that he looks forward to working closely with his Indian counterpart Narendra Modi to strengthen the relations as well as the people-to-people contacts between the two neighboring countries.

Immediately after Deuba won a vote of confidence in the reinstated House of Representatives on Sunday night, PM Modi took to his twitter and wrote: “Congratulations Prime Minister @DeubaSherbdr and best wishes for a successful tenure. I look forward to working with you to further enhance our unique partnership in all sectors, and strengthen our deep-rooted people-to-people ties."

Responding to Prime Minister Modi's tweet, Deuba thanked his Indian counterpart for his congratulatory message and expressed his desire to work closely with him to strengthen the bilateral ties between the two neighboring countries.

"Thank you very much, Prime Minister @narendramodi Ji, for your congratulatory note. I look forward to working closely with you to strengthen the relationship between our two countries and people," Deuba tweeted late Sunday night.

Deuba, who was appointed as the Prime Minister as per the Article 76(5) of the Constitution on July 12 following Supreme Court's intervention, secured 165 votes in the 275-member House on Sunday.

A total of 136 votes were required for Deuba to win Parliament’s confidence. He had to seek a trust vote within one month after being appointed as prime minister. However, in a surprise move, he sought a vote of confidence on the first day of the reinstatement of the House.

Nepal plunged into a political crisis on December 20 last year after President Bidhya Devi Bhandari dissolved the House and announced fresh elections on April 30 and May 10 at the recommendation of Prime Minister K P Sharma Oli, amidst a tussle for power within the ruling Nepal Communist Party (NCP).

On February 23, the Supreme Court reinstated the dissolved House of Representatives giving a huge setback to K P Sharma Oli as he was preparing for snap polls.

The bilateral ties between India and Nepal have gone through several ups and downs. Last year, the India-Nepal ties went through multiple thaws because of the map issues. Nepal, one after the other, published maps in which they included Kalapani, Lipulekh, and Limpiyadhura region in their side of the territory.

After the incident, reports of strained ties between the cordial neighbors started cropping up. In their bid to reset ties, high-level leaders from both sides indulged in regular bilateral talks and the situation cooled down.

Besides, India and Nepal also reviewed the bilateral ties in the Joint Commission meeting held in January 2021. From Covid-19 to infrastructure and economy, various issues were brought up during the meeting.

Further, during the times of Covid-19, India assisted Nepal with medical supplies and has also sent more than one million vaccine doses as a gift to its neighboring country. There was a halt in the supply; however, keeping up with the domestic needs, India will resume helping its neighbor in terms of supplying the vaccine doses.

Going by the same, it could be said that whenever there have been strained ties between both sides, equal efforts have been made to regain the momentum diplomatically. With the new Prime Minister’s tweet, it is clear that the road ahead for India and Nepal seems smooth sailing.

In fact, if under the new leadership, the focus is increased to more air, road, train, and waterways connectivity, besides playing an active role in several important multilateral forums such as BBIN (Bangladesh, Bhutan, India and Nepal), BIMSTEC, NAM, and SAARC, India and Nepal could see a year of expansion of bilateral ties.