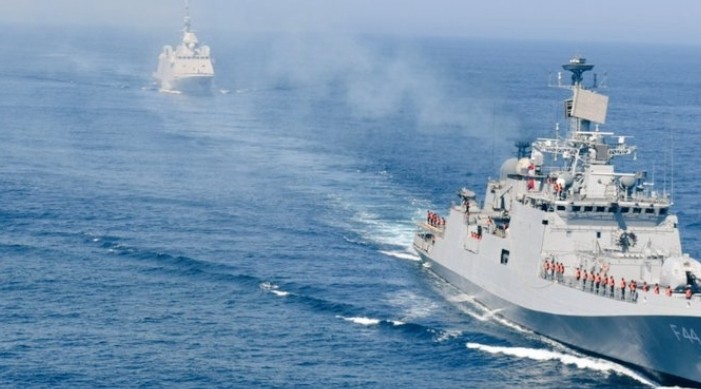 The exercise was held on July 15-16. (Source: Twitter @indiannavy)

The exercise took place on July 15-16 after INS Tabar completed a port visit to Brest, France.

A twin engine helicopter (NH 90) from FNS Aquitaine and four Rafale fighter aircraft from French Navy also participated in the exercise, said a statement of the Ministry of Defence on Monday.

The exercise was mutually beneficial in enhancing interoperability and towards consolidating combined operations against maritime threats.

INS Tabar entered the Port of Brest in France on 12 July as part of its ongoing overseas deployment. The ship was received by a Ceremonial Guard of the French Navy on arrival in Port.

The ship dressed overall on the occasion of the Bastille Day (national day of France), as per naval custom.

Earlier, on 13 June, Indian Naval Ship Tabar commenced her prolonged deployment and is expected to visit a number of ports in Africa and Europe till end-September.

INS Tabar is operating in conjunction with the friendly navies, so as to build military relations and develop interoperability by making port calls and participate in joint exercises with the navies of Africa, Europe and Russia.

Earlier, INS Tabar undertook a Maritime Partnership Exercise with ITS Antonio Marceglia (F 597), a frontline frigate of the Italian Navy in the Tyrrhenian Sea on 4-5 July.

INS Tabar also visited the port of Alexandria in Egypt in June, where it undertook a maritime partnership exercise at sea with the Egyptian Navy Ship Toushka.