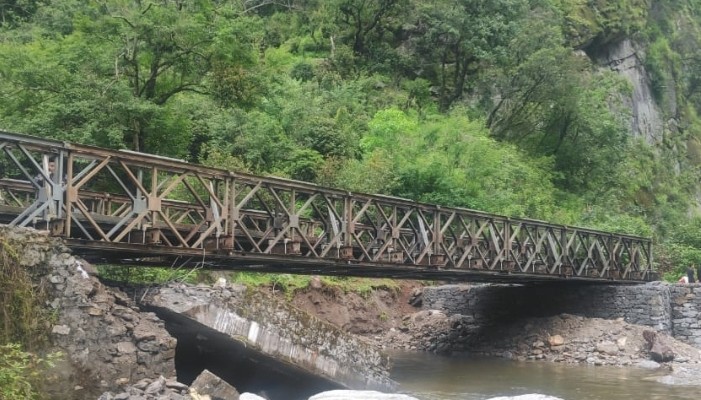 In April, BRO had constructed the Daporijo Bridge over the Subansiri river in Arunachal Pradesh

In line with the thrust to enhance strategic connectivity along India’s borders, the Border Roads Organisation (BRO) has launched a 80-feet Double Suspension (DS) Bailey Bridge (BB) on a road in Tawang.

The road is the historical route of the Dalai Lama’s passage to India.

“BRO India launched 80 Feet DS BB on Khinzemane-Zimithang road at an unprecedented pace to restore the stalled traffic movements. The road is important for Army, ITBP and civilians...,” said a tweet from the official BRO handle on Sunday.

“And also the road is historical route of induction of Dalai Lama in India. BRO Karmyogis did a wonderful job by constructing the bridge in a record time,” BRO added.

Defence Minister Rajnath Singh had reiterated the Government’s commitment to the progress of the far-flung areas near the borders of the country.

Speaking on the occasion on the establishment of two Centres of Excellence established by BRO in June, Singh had praised the Border Roads Organisation (BRO) for working tirelessly to increase connectivity in border areas, especially during the COVID-19 pandemic.

The Union Budget for the current fiscal 2021-22 had proposed increased funding for Border Roads Organisation (BRO) to boost infrastructure in frontier areas.

The budget for maintenance of border roads has gone up from Rs 750 crore to Rs 850 crore, while the capital works allocation has been revised upwards to Rs 2,500 crore from budgetary provision of Rs 2,300 crore for Financial Year 2020-21.

This increased allocation shall facilitate procurement of modern construction plants, equipment and machinery to enhance the pace of construction warranted by strategic imperatives,.the government had said.

A large share of increased funding will be used for better upkeep of strategic roads in the border areas and it will also give a major boost to construction of strategically important roads, tunnels and bridges along the northern and north-eastern borders.