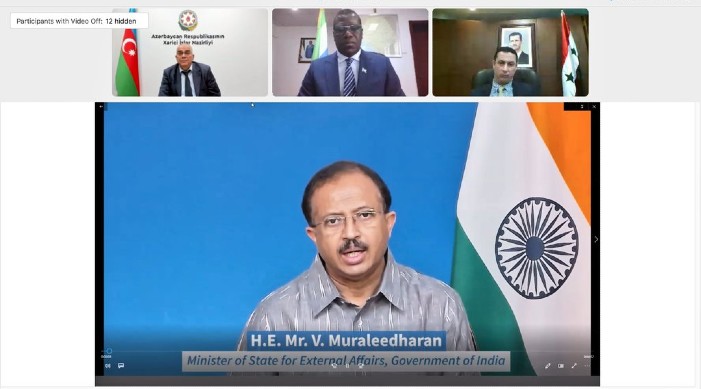 NAM must never be used as a platform for pursuits aimed at undermining the sovereignty of a country, the Minister said

The Non-Aligned Movement's approach must be anchored in reformed multilateralism and it must lead efforts to strengthen international legal frameworks to combat terrorism and its enablers, without exceptions or double standards said Minister of State (MoS) for External Affairs V Muraleedharan on Wednesday.

Speaking at the Non-Aligned Movement (NAM) Mid-Term Ministerial Meeting, MoS Muraleedharan said, “Terrorism is the most flagrant threat not only to international peace and security but to the very principles and values we hold dear. NAM must be at the vanguard of efforts to strengthen international legal frameworks, without exceptions or double standards, to coherently combat the disruptive activities of terrorists and their enablers - which have continued unabated and, in fact, only increased during the pandemic.”

The minister further said that NAM must never be used as a platform for pursuits aimed at undermining the sovereignty of a country.

"NAM must never be used as a platform for pursuits aimed at undermining the sovereignty or territorial integrity of a State by another State."

“Individual members of our movement must introspect before they weaken our Movement by taking up divisive issues or targeting fellow Members, reducing NAM to a forum for venting out on bilateral disputes,” he added.

According to the Ministry of External Affairs (MEA), the NAM was created and founded during the collapse of the colonial system and the independence struggles of the peoples of Africa, Asia, Latin America and other regions of the world and at the height of the Cold War.

Throughout its history, the Movement of Non-Aligned countries has played a fundamental role in the preservation of world peace and security, the MEA said.

Noting that the pandemic has brought to the fore our interconnectedness and interdependence: we simply cannot fight this adversary alone, the MoS said, “Our Movement has demonstrated this by taking the lead in convening the NAM Contact Group and Task Force in response to COVID-19 as early as May 2020, as well as a UNGA Special Session. These provided opportunities to pool our experiences, best practices and resources.”

He recalled Prime Minister Narendra Modi’s message during the NAM Contact Group Summit, and said that true to our vision of the the world as one family, India has been committed to sharing our expertise and resources with the global community throughout this battle, despite our own domestic requirements.
“How can NAM ensure that it is a relevant and effective stakeholder in navigating these challenges? The answer lies in an approach which is inclusive, transparent and anchored in reformed multilateralism. We need international institutions that are more representative of today’s world, and a new vision of globalization based on fairness, equality and humanity,” he added.