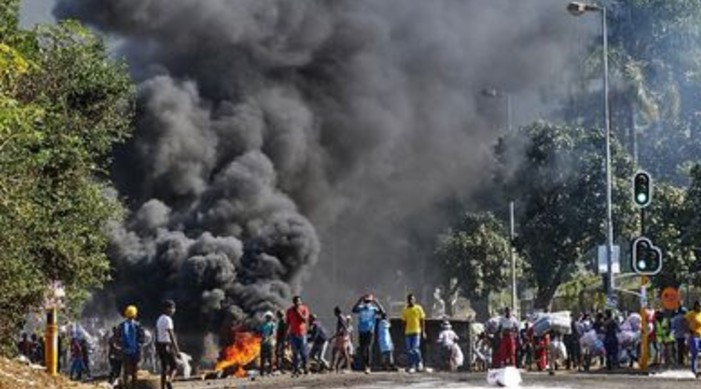 Arson and looting have plunged South Africa into chaos

India has taken up the matter of safety and security of Indians and Indian-origin South Africans with the authorities in South Africa in the wake of violence that has gripped the country following the arrest of former President Jacob Zuma on corruption charges.

It was a cordial and open conversation as the two leaders know each other personally. Separately, Sanjay Bhattacharya, Secretary in the MEA also met the High Commissioner of South Africa to India, Joel Sibusiso Ndebele.

The South African side, as per sources, assured that their Government was doing its utmost to enforce law and order and asserted that early restoration of normalcy and peace was its overriding priority. They expected the situation to improve soon.

Regarding reports of arson and looting against Indians and Indian-origin South Africans, the South African side conveyed that opportunistic elements were taking advantage of the situation to engage in looting and violence, as had been highlighted by President Ramaphosa in his address to the nation on July 12.

South African authorities emphasized that the ongoing events were criminal in nature and not political or racially motivated.

Arson and looting have plunged South Africa into chaos. The violence erupted across the country following the arrest of former President Jacob Zuma, who was last week sentenced to 15 months in prison for contempt of court. Zuma was found guilty of defying a court order to appear before a state-backed agency probing allegations of corruption during his term as President from 2009 to 2018.

Agitated over the former President’s arrest, Zuma's supporters blocked roads and highways, using burnt tires and other objects as obstacles.

Among areas affected by the rioting are Durban, Pietermaritzburg and Johannesburg, all of which have a sizable population of Indian expats. Reports are also coming of businesses owned by Indians and Indian-origin South Africans being targeted by looters.