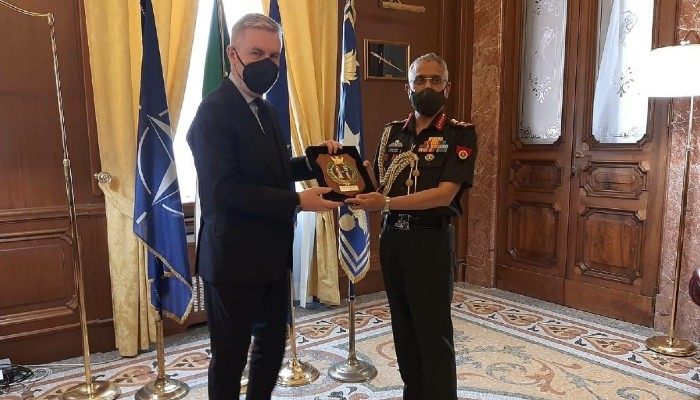 Indian Army Chief General MM Naravane on a two-day official visit to Italy on 7-8 July, interacted with his counterpart Lieutenant General Pietro Serino and discussed aspects of joint military cooperation with him.

Gen Naravane is visiting Italy in the second leg of his four-day tour to UK and Italy from 5 to 8 July.

UK and Italy are important partners for India in the fields of defence, healthcare, aerospace, education, clean technology, renewable energy and information and communication technology.

On his visit to UK on 5-6 July, the Indian Army Chief interacted with UK’s Chief of Defence Staff General Sir Nicholas Carter and his British counterpart General Sir Mark Carleton-Smith and held bilateral discussions on cooperation in defence sector.

While in Italy, General Naravane will also inaugurate the Indian Army Memorial in the famous town of Cassino during his visit to Italy.

The Indian Army Memorial is a tribute to more than 5,000 Indian soldiers who lost their lives in the Battle of Monte Cassino during World War II as part of efforts to liberate Italy from fascist forces.

He will also be briefed at the Italian Army’s Counter IED Centre of Excellence at Cecchingola, Rome.