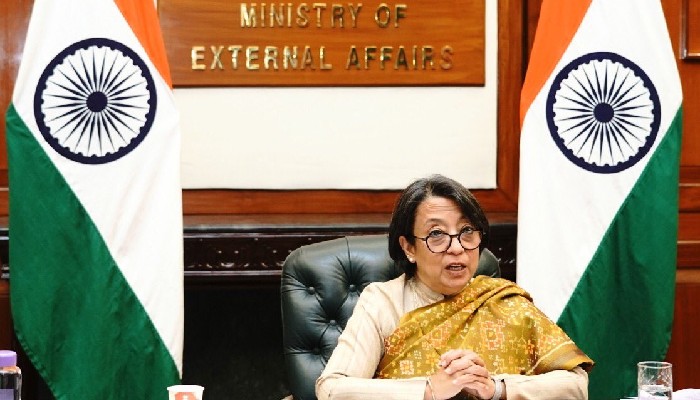 “We need to strengthen connectivity, build infrastructure and facilitate trade in the Indo-Pacific,” Riva Ganguly Das

Technology and innovation will play a critical role in the post-pandemic recovery, as will multilateral collaboration, Secretary East Riva Ganguly Das said on Tuesday while addressing the special session of the first edition of the Indo-Pacific Business Summit in a virtual format.

“To tide over the challenges, we need to strengthen connectivity, build infrastructure and facilitate trade. We are focusing on tapping more trade, investment and technology partnerships in the Indo-Pacific. Ground has been set for this with greater connectivity, trade facilitative measure, new labour laws, agricultural reforms, private sector entry into newer areas, and an incentive-driven push to promote manufacturing,” the Secretary East said.

Highlighting the importance of the Indo-Pacific for India, she said since a large number of the country’s trade now heads to the east, the region has acquired growing significance for the country.

With regard to trade with Africa, she said, “We had a combined trade of around $18 billion” with South Africa, Kenya, Mozambique and Tanzania.

“This economic dynamism of the region is equally reflected in India’s relationship with the region. We place our Neighbourhood First and we Act East. We are strengthening relations with the states of West Asia and the Gulf as we Think West. We have also intensified our partnership with countries in Africa, Latin America, the Caribbean and Oceania,” the Secretary East said.

Emphasizing the importance of international trade, she said, “Over 50% of global trade passes through the Indo-Pacific and it produces over 62% of global GDP. Emerging economies of the region have become the primary drivers of the global growth, shifting the economic centre of gravity to this region. The 21st Century would see increasing focus to the Indo-Pacific Region connecting Africa, Asia, Eurasia’s Pacific Coast, Oceania and the Pacific Coast of the Americas.

As for India’s commitment to promote trade facilitation through cross border linkages and building infrastructure in the country’s immediate neighbourhood, she said, “Since 2005-06, India has extended Lines of Credit worth nearly USD 31 billion to more than 64 countries. Connectivity projects are being implemented at an unprecedented pace in our neighbourhood. Railway projects with Bangladesh and Nepal, Port projects in Iran and Myanmar, respectively, and inland water projects have created new transport corridors.”

“The energy grids of India, Bangladesh, Bhutan, Nepal and Myanmar are being linked. India has invested in power projects in Bangladesh, Bhutan and Nepal. Power trade in our neighbourhood has now become a reality. Hydrocarbon pipelines can now link India with Nepal and Bangladesh,” she added.

“Such cross border linkages are not limited to physical infrastructure but include the digital linkages as well. The digital revolution and new technologies have added a new dimension to global interaction which includes geopolitics and geo-economics,” the Secretary East maintained.

“Data and e-commerce regulation, cyber security, digital enablers, big data, fintech - which include some developed in India such as IndiaStack, Aadhar, UPI - and the newest technologies are acquiring salience in international discussions. Our capacity to seamlessly navigate this tech world and its intersection with geo-politics and geo-economics has potential to act as a multiplier in trade facilitation,” she said.