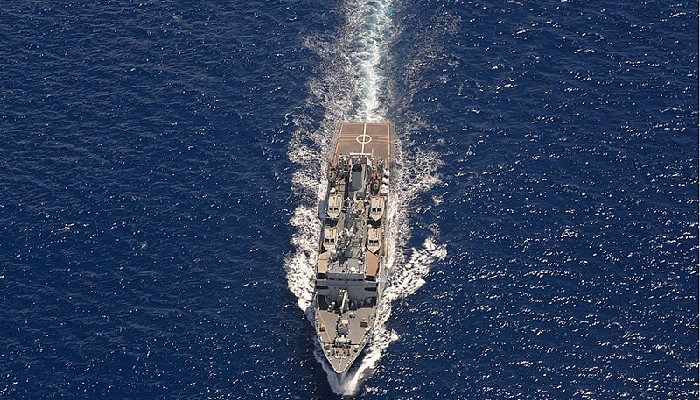 INS Sarvekshak, a hydrographic survey ship on Friday successfully completed survey around the site of ill-fated MV X-Press Pearl in the Sri Lankan waters and handed over the survey data to the island country’s authorities

The ship equipped with the state of the art survey equipment including the Side Scan Sonar, was deployed on June 25 at the request of the Sri Lankan government.

The survey operations were launched around three areas where wreckage of the cargo ship MV X-Press Pearl took place. It was done in coordination with the Sri Lanka Navy and Sri Lanka’s National Aquatic Resources Research and Development Agency (NARA).

The ship undertook a total of 807 miles of Side Scan Sonar survey and identified 54 prominent underwater debris from MV X-Press Pearl and also one additional uncharted wreck.

The survey of the wreckage area would facilitate issuance of advisory to both mariners and fishermen, and subsequent removal of debris by Sri Lankan authorities, thereby ensuring safety of navigation for marine traffic operating through Colombo port.

INS Sarvekshak, is based at Southern Naval Command at Kochi and is fitted with state-of-the-art survey equipment like Deep Sea Multi-beam echo sounder system, Side Scan Sonar, Sound Velocity Profilers, and a fully automated digital surveying and processing system.

In addition, the ship carries a Chetak helicopter which was extensively deployed during the survey for aerial recce. In the past, INS Sarvekshak has also undertaken foreign cooperation surveys in Mauritius, Seychelles, Tanzania and Kenya.

India and Sri Lanka share a strong bond and partnership, and this survey operation has been another milestone in strengthening cooperation and understanding between the two countries and reinforcing the shared values.