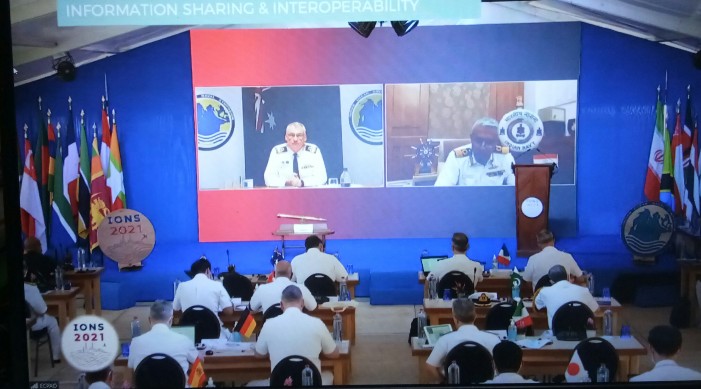 France has assumed the Chairmanship of IONS on June 29, 21 for a two-year term

Conceived by the Indian Navy in 2008, IONS seeks to enhance maritime cooperation among Navies of the littoral states of the IOR

The 7th edition of Indian Ocean Naval Symposium, a biennial event, was hosted by the French Navy at La Réunion from June 28 to July 1, 2021.

Admiral Karambir Singh, Chief of the Naval Staff, Indian Navy, participated virtually in the inaugural session of the event and provided his congratulatory remarks to the outgoing and incoming chairman.

IONS, conceived by the Indian Navy in 2008, seeks to enhance maritime cooperation among Navies of the littoral states of the IOR by providing an open and inclusive forum for discussion of regionally relevant maritime issues that would lead to common understanding on the way ahead.

IONS Conclave of Chiefs (CoC) is the decision-making body at the level of Chiefs of Navies, which meets biennially.

The 6th IONS and CoC was conducted by the Iran Navy in April 2018 at Tehran. Owing to the pandemic, the CoC 2021, will be hosted by French Navy later this year.