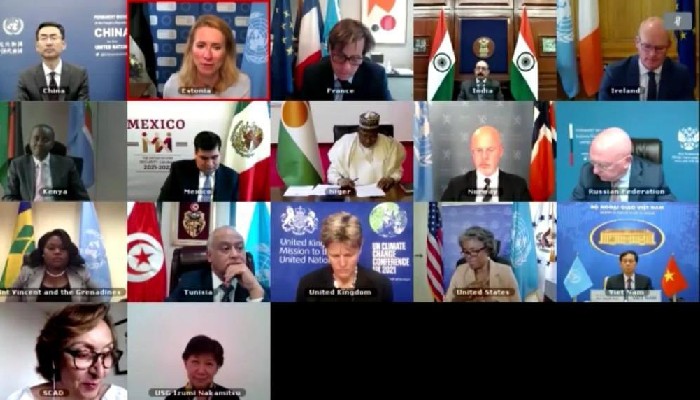 Integrity and security of ICT products, which form the building blocks of cyberspace, are being compromised, said Foreign Secretary Shringla

India has stressed on the need for tackling the implications of exploitation of cyberspace by terrorists, stating that they are using the internet to broaden their appeal and spread virulent propaganda.

“We are witnessing a sophisticated use of cyberspace by terrorists around the world to broaden their appeal, spread virulent propaganda, incite hatred and violence, recruit youth and raise funds. Terrorists have also used social media for planning and executing their terror attacks and wreaking havoc. As a victim of terrorism, India has always underlined the need for Member States to address and tackle the implications of terrorist exploitation of the cyber domain more strategically,” Foreign Secretary Harsh Vardhan Shringla said while speaking at the UN Security Council Open Debate on “Maintenance of International Peace and Security: Cyber Security”

Without taking Pakistan’s name, the Foreign Secretary said some States are leveraging their expertise in cyberspace to achieve their political and security-related objectives and indulge in contemporary forms of cross-border terrorism.

“The world is already witnessing the use of cyber tools to compromise State security through, inter alia, attacking critical national infrastructure, including health and energy facilities; sometimes disrupting social harmony through radicalisation. Open societies have been particularly vulnerable to cyber-attacks and disinformation campaigns,” Shringla said.

“There are widespread concerns that State and Non-State Actors are introducing vulnerabilities and harmful hidden functions, including through backdoor channels, into ICT networks and products,” the Foreign Secretary said.

Such nefarious acts undermine trust and confidence in global ICT supply chains, compromise security and create potential flashpoints between States. It is in the interest of the international community to ensure that all actors abide by their international obligations and commitments and not indulge in practices that could have potentially disruptive effects on global supply chains and trade in ICT products.”

To provide solutions, FS Shringla said that the Member States need to adopt a collaborative rules based approach in cyberspace and work towards ensuring its openness, stability and security.

However, he said India is committed to an open, secure, free, accessible and stable cyberspace environment, said Foreign Secretary Harsh Vardhan Shringla on Tuesday, adding that it will become an engine for innovation, economic growth, sustainable development, and ensure free flow of information and respect cultural and linguistic diversity.

FS Shringla noted that India has leveraged the tremendous potential of cyber technologies in implementing the SDG agenda and improving governance with transformative technology initiatives in recent years such as IndiaStack, Aadhar and UPI.

Besides, as part of its COVID vaccination drive, one of the largest such drives in the world, India has developed Co-WIN – a scalable, inclusive and open technological platform. On this, FS Shringla said, “The Co-WIN platform can be customized and scaled up for health interventions across the globe. We are working on sharing this platform with partner countries in the interest of health cooperation and their preparedness to meet challenges to the health of countries across the world.”

“Our overarching objective is to harness cyberspace for the growth and empowerment of people, not just of our own country, but for all humanity. India stands ready to offer its expertise and share its experience in this endeavor,” he added.

Further, FS Shringla said that the increasing use of cyber and information-communication technologies has accelerated economic development, improved service delivery to citizens, generated greater social awareness and placed information and knowledge in the hands of individuals.

“Most activities in this cyber-age - political, social, economic, humanitarian and developmental – (including this UNSC high level meeting) - are now conducted in or connected to cyberspace. The COVID-19 pandemic has only accelerated and expanded the digitalization of these activities,” he said.

However, the foreign secretary noted that the borderless nature of cyberspace, and more importantly anonymity of actors involved, has challenged the traditionally accepted concepts of sovereignty, jurisdiction and privacy. These unique attributes of cyberspace present their own set of challenges for Member States, he said.

“The momentum generated by the positive outcomes of the Group of Governmental Experts on advancing responsible State behaviour in cyberspace and the Open-Ended Working Group on developments in ICT should be leveraged to find further common ground and improve upon the already agreed cyber norms and rules. These rules must strive to ensure collective cyber security through international cooperation. Multi-stakeholder involvement would help in achieving this objective,” he said.

Further he said that fostering equitable access to cyberspace and its benefits should also form an important component of this international co-operation. The widening "Digital gaps” and "Digital knowledge gaps” amongst countries create an unsustainable environment in the cyber domain, he said.

“Growing digital dependency in the post-COVID era has exacerbated risks and exposed these fissures of digital inequalities. These must be bridged through capacity building. The pervasive and boundary-less nature of cyberspace implies that we are only as strong as the weakest link in the global network. ‘Only together’ we can achieve the goal of a globally secure, resilient cyberspace and we must ensure that no country is left behind in this collective endeavor,” FS Shringla added.