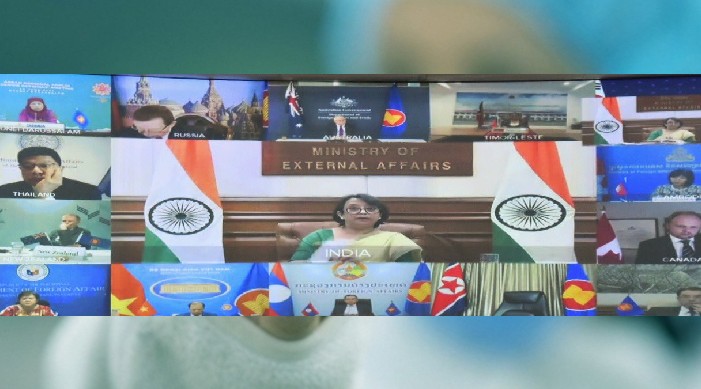 This concern was conveyed during India and ARF Senior Officials’ meet

Expressing its concern over growing traditional and non-traditional threats to the maritime security environment, India on Tuesday called for the need to work together based on convergences between the ASEAN Outlook for the Indo-Pacific and India’s Indo–Pacific Oceans’ Initiative and Indo-Pacific policies announced by several ARF countries.

Secretary (East) in the Ministry of External Affairs, Riva Ganguly Das conveyed such concern while participating in the ASEAN Regional Forum Senior Officials’ Meeting in a virtual format. The meeting was attended by representatives from the 27 ASEAN Regional Forum countries.

According to the MEA, the Secretary East also shared India’s perspectives on addressing the threat posed by terrorism and the challenges of cyber security.

The meeting reviewed ARF activities and exchanges over the past year and deliberated on the future plans and efforts under the ARF.

In June 2021, India co-chaired an ARF workshop on ‘United Nations Convention on the Law of the Sea’ and will co-chair an Inter-Sessional Meeting on Maritime Security, workshops on “Law of the Sea and Fisheries”, and "International Ship and Port facility Security Code” in the upcoming year.