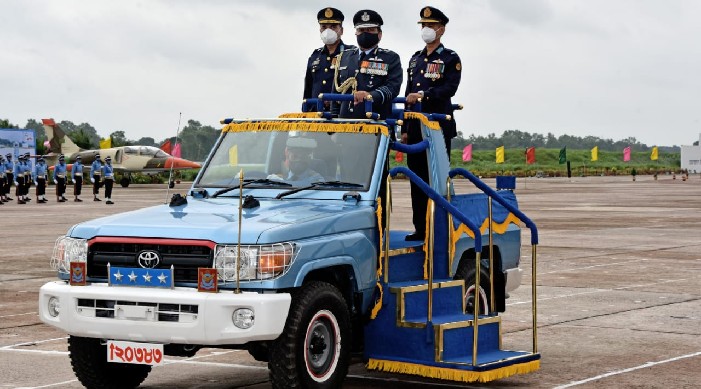 CAS Bhadauria reviewing the Passing Out Parade at Bangladesh Air Force Academy in Jashore on June 28, 2021

Air Chief Marshal RKS Bhadauria has held detailed talks with Chief of Air Staff Bangladesh Air Force Shaikh Abdul Hannan and other senior military brass of the country on issues of mutual interest. They have also discussed avenues to further strengthen the all-encompassing defence cooperation between India and Bangladesh.

On Monday, Chief of Air Staff RKS Bhadauria who is on a two-day visit to Bangladesh, reviewed the passing out parade and commissioning ceremony at Bangladesh Air Force Academy in Jashore and complimented the graduating trainee for an excellent parade.

This review of the passing out parade was made by IAF Chief R K S Bhadauria is seen as highly significant in view of the Golden Jubilee of the historic victory in 1971 War for Liberation of Bangladesh.

This occasion also marks the first instance when any foreign Chief was invited to review the Parade as the Chief Guest – a re-affirmation of the strong bonds of friendship and trust between India and Bangladesh and their Armed Forces.

While addressing the graduating trainees on parade, the CAS noted the rapid progress being made in all aspects of military level interactions, with bilateral defence cooperation having become an important pillar in the deep historical and fraternal ties between India and Bangladesh.

The CAS described this event as a reflection of the excellent state of professional relationship between the two Air Forces based on mutual trust and understanding. He expressed confidence that his presence in BAFA during this historic 50th year of the Liberation War would reinforce the already strong and multi-dimensional partnership between the two Nations.

During his visit, the CAS also interacted with the High Commissioner of India Vikram K. Doraiswami during his stay in Dhaka.

The visit by the CAS to Bangladesh came over two months after Army Chief Gen MM Naravane travelled to the country.