63 bridges in border areas, including crucial link in Eastern Ladakh, opened in one go 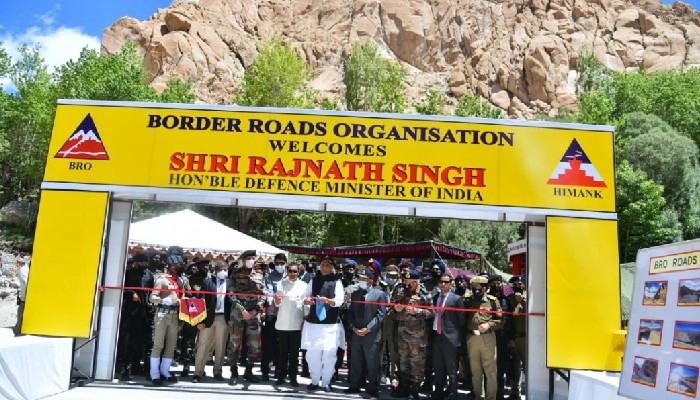 In a major boost to connectivity in India's border areas, 63 bridges in six states and two Union Territories (UTs) were inaugurated by Defence Minister Rajnath Singh on Monday.

The bridges, constructed by the Border Roads Organisation (BRO), include a 50-metre-long bridge constructed on the Leh-Loma Road in Ladakh.

The crucial Leh-Loma Road, which connects Leh with places such as Chumathang, Hanley and Tso Morori Lake, is vital for access to forward areas in Eastern Ladakh, the Ministry of Defence said.

Sixty-two more bridges were inaugurated virtually by Defence Miniser Singh. Of these, 11 are in Ladakh, four in Jammu & Kashmir, three in Himachal Pradesh, six in Uttarakhand, eight in Sikkim, one each in Nagaland and Manipur and 29 in Arunachal Pradesh.

With the inauguration of 63 bridges in one go, BRO has surpassed its own record of 44 bridges launched in 2020, the defence ministry pointed out.

These 63 bridges, combined with 12 roads dedicated to the nation by Defence Minister Singh on June 17, form a bouquet of 75 infrastructure projects completed by BRO, when the nation is celebrating the 75th anniversary of its Independence.

Underlining the importance of connectivity, especially in border areas for the development of a nation, the Defence Minister reaffirmed the Government’s resolve to ensure infrastructure development in far-flung border areas.

Singh added that today’s inauguration of 63 bridges was an important step in that direction. He expressed confidence that the bridges will play a crucial role in strengthening security as well as promoting the economic development of the respective states through improved connectivity.

The projects were inaugurated by the Defence Minister at an event held at Kyungam, 88 kms from Leh, the capital of Ladakh.