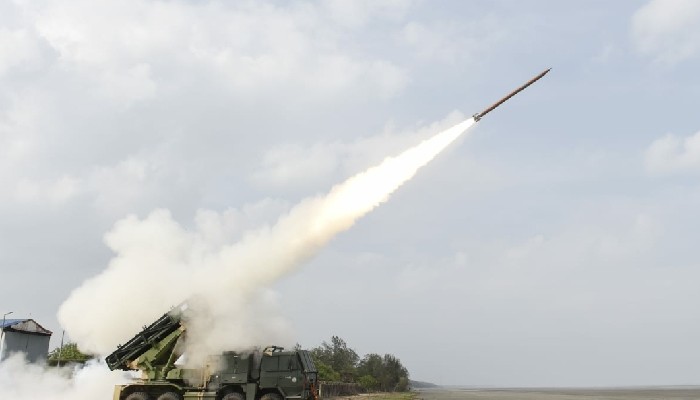 The rocket was test fired at the Interim Test Range in Chandipur, Odisha.

All the mission objectives were met during the test firing, said the Ministry of Defence

With a successful test firing operation spread over two days, the Defence Research and Development Organisation (DRDO) has demonstrated the strike capabilities of the extended range version of the Pinaka rocket system.

The enhanced range version of the Pinaka Multi-Barrel Rocket System (MBRS) can destroy targets at distances up to 45 kms, up from the original range of upto 38 kms.

The successful test firing was carried out at the Integrated Test Range (ITR), Chandipur off the coast of Odisha.

During the test firing, 25 Enhanced Pinaka Rockets were launched in quick succession against targets at different ranges. All the mission objectives were met during the launches, said the Ministry of Defence.

"All the flight articles were tracked by Range instruments including Telemetry, Radar and Electro Optical Tracking System deployed by ITR & Proof and Experimental Establishment (PXE)," the ministry said.

With two pods containing 6 rockets each, the Pinaka system can fire a salvo of 12 rockets over a period of 44 seconds.

Defence Minister Rajnath Singh congratulated DRDO and the defence industry on the successful launch of the rockets. Secretary, Department of Defence R&D and Chairman DRDO G Satheesh Reddy also commended the efforts of the teams involved in the successful trials.