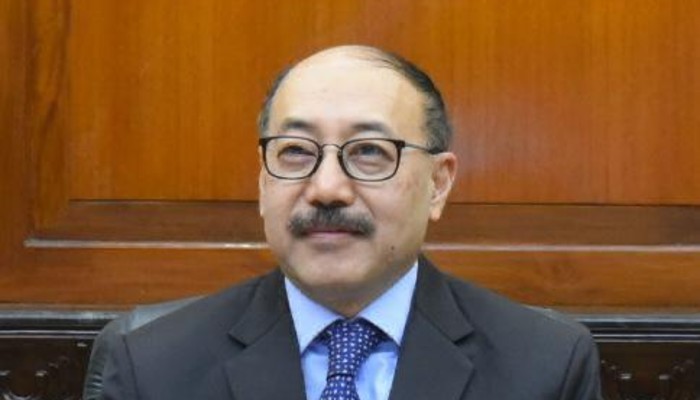 India needs to focus on acquiring leadership role that allows it to participate and contribute in the emerging world order, said Shringla

Observing that we inhabit a world in which centres of diplomatic gravity are in rapid transition, Foreign Secretary Harsh Vardhan Shringla said on Friday that the rise of China has placed India in a central role at the geopolitical stage.

“The rise of China has also placed us in a central role at the geopolitical stage. It is our largest neighbor and one with which we share more than just a border and proximity. We have also had to confront a specific strategic challenge posed by China and its tactics on our shared border,” the Foreign Secretary in his remarks on the topic ‘India’s Foreign Policy in the Post-Covid World: New Vulnerabilities, New Opportunities’.

“We inhabit a world in which centers of diplomatic gravity are in very rapid transition. For the first time in centuries, Asia is beginning to drive the global economy,” Shringla said.

“Politically, the bipolar order that prevailed during the Cold War gave way to a unipolar system following collapse of the USSR. A further transition is underway as this unipolar world order moves to a multipolar system,” he added.

Completely new threats and security challenges such as terrorism, climate change and biological and other non-traditional threats have emerged and continue to emerge, he highlighted.

“As a ministry we are thus faced with a rapidly changing geopolitical and geo-economic environment even as we cope with very complicated tactical requirements,” he reckoned.

A pandemic of this nature, requires not just a whole-of-government approach but a whole-of-society approach. It also requires us to source solutions and capacities on a global basis, argued the Foreign Secretary.

He asserted that today’s environment is highly complex, multi-layered and multi-dimensional requiring India to build capacities that allow it to maintain decisional autonomy.

Calling for deepening cooperation with old partners and allies and forging newer partnerships with rising powers, he stated that New Delhi must have a dynamic and proactive global strategy in a multipolar world that adjusts to alliances and convergences that are fluid and issue based.

“We must engage simultaneously with multiple centers of gravity and capacities in an extremely complex and fast-moving global scenario,” the Foreign Secretary maintained.

He highlighted three specific areas where India has a value proposition in the post-Covid world viz. opportunity created by the ongoing transition to knowledge economy, requirement of de-risking and diversification of supply chains and lastly climate change.

“The first opportunity is created by the ongoing transition to a knowledge economy wherein output will be driven as much by new technologies and digital processes as it is driven by agriculture and goods and services,” Shringla suggested.

A country like India with its emphasis on education and innovation is well placed to take advantage of this transformation, he mentioned.

“The second opportunity will arise due to the requirement of de-risking and diversifying supply chains,” the Foreign Secretary noted.

Businesses are trying to create secure and stable supply chains that will be able to deal with pandemic level shocks, he added.

A third area of opportunity mentioned by the Foreign Secretary is in Climate change which is one of the defining challenges of our time. India is amongst the front rank of nations with climate ambition.

Despite our development challenges, we have taken major initiatives in the areas of clean energy, energy efficiency, afforestation and bio-diversity, he recounted.

Energy is at the centre of India’s ambition and agenda, added the Foreign Secretary.

Massive investments have been made in augmenting India’s renewable power capacity, he informed.

“The two major global initiatives supported by India – International Solar Alliance and the Coalition for Disaster Resilient Infrastructure – are emerging as useful platforms for cooperative action in the area of climate change,” he explained.

Asserting that India has called for a reformed multilateralism and human-centric globalization, Shringla specified that it is a globalization based on fairness, equality and humanity, one that prioritizes our people and our planet, and our collective and sustainable prosperity.

India is a constructive contributor to the efforts to create such an international order by sharing developmental experience with partner countries in the Global South, he remarked.