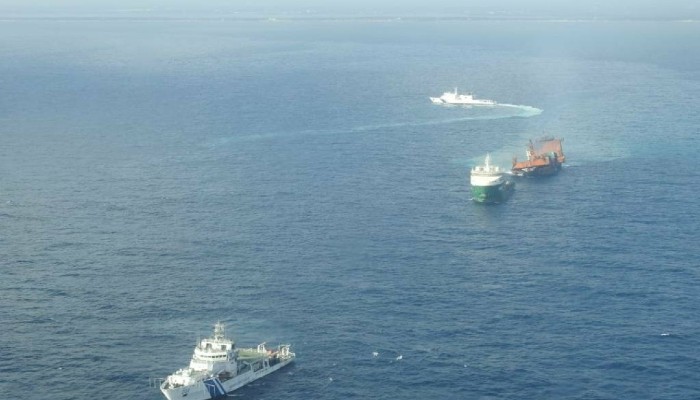 Referring to the operation during a discussion with the Indian envoy, the Sri Lankan Defence Secretary recalled the long existing bilateral ties and cooperation between the two countries, said an official statement.

The two sides drew attention to the avenues of smooth functioning of long-existing military training exchange between two countries while taking the pandemic situation into consideration.

Focused areas of bilateral cooperation including the matters of mutual relevance were also discussed during the session.

Mementos were exchanged between the Defence Secretary and Indian High Commissioner to mark the occasion.

Indian Coast Guard vessels on Thursday returned back after working tirelessly alongside Sri Lanka for more than two weeks in Operation Sagar Arakasha 2.

It may be recalled that the Indian Coast Guard vessels were deployed since May 25, hours after receiving a request for assistance from Sri Lanka Navy to douse the fire on board MV XPress Pearl and also provided pollution control help.

The three ICG vessels along with a Dornier aircraft were actively involved in the efforts towards dousing the fire onboard MV XPress Pearl.

Earlier, on Thursday, Commander of Sri Lankan Navy Vice Admiral Nishantha Ulugetenne received Captains of the Indian Coast Guard (ICG) vessels which were deployed in Operation Sagar Araksha II as they arrived at Colombo Port for operational turn around.

The Sri Lankan Navy Vice Admiral acknowledged the huge support provided by these vessels and specially thanked India for its prompt response to the incident involving the MV XPress Pearl.

Captains briefed the Commander about their role in the Operation particularly about Samudra Prahari, which is a specialized pollution response vessel.

Indian High Commissioner Baglay, who joined on the occasion, thanked the Commander and Sri Lanka Navy for extending whole-hearted cooperation to the Indian vessels throughout the operation.

He conveyed that it was not merely the geography that bound India and Sri Lanka in the maritime sphere, but the tradition of close cooperation in responding to emergencies such as HADR and accidents at sea as evidenced in Operaration Sagar Araksha I & II.

India’s envoy to Sri Lanka underlined that bilateral mechanisms to appropriately respond to emergency situations in the shared maritime space is the need of the hour.

He also highlighted that as India and Sri Lanka work jointly towards ensuring safety and security in the shared maritime space, it was important to remain adequately prepared for natural disasters and man-made catastrophes as they could recur.