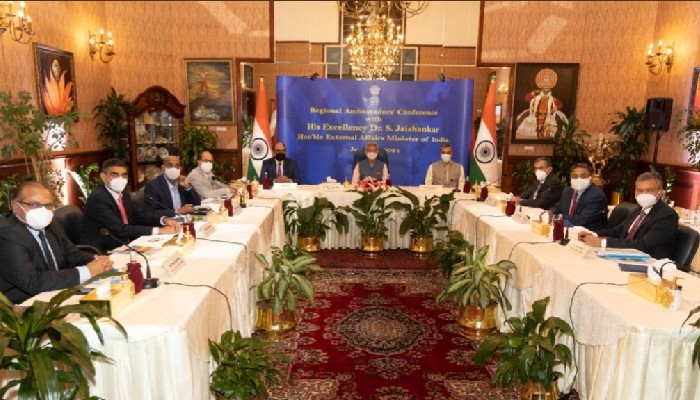 External Affairs Minister S Jaishankar chaired a meeting with Indian Ambassadors stationed in seven Middle-East countries on Thursday where he discussed the priorities of the government and expressed confidence that the envoys will deliver on the same.

In a series of tweets, Jaishankar said the the discussions focused around five issues.

First, ensuring utmost welfare of the Indian community in respective jurisdictions. Second, facilitating reuniting of families separated by Covid disruption. Third, interceding for early return of Indian talent and skills who left the Gulf during the pandemic.

Fourth, encouraging speedy resumption of flights to Gulf destinations to help NRIs. Lastly, to strongly push our trade interests that contribute to economic recovery at home.

EAM Jaishankar said he was confident that the Ambassadors and Embassies will deliver on these priorities.

Jaishankar is on a visit to Kuwait from June 9-11 at the invitation of Sheikh Ahmed Nasser Al-Mohammad Al-Sabah, Foreign Minister and Minister of State for Cabinet Affairs, State of Kuwait.

This is his first visit to Kuwait as External Affairs Minister.

During the visit he will hold high level meetings and also address the Indian community in Kuwait.

He is also carrying a personal letter from Prime Minister of India to the Amir of Kuwait.

The year 2021-22 marks the 60th anniversary of establishment of diplomatic relations between India and Kuwait.

Traditionally warm and close bilateral relationship between India and Kuwait is characterized by strong people-to-people connect.

There are around one million Indians residing in Kuwait. India is amongst the largest trading partners of Kuwait and Kuwait is a major supplier of oil for India.