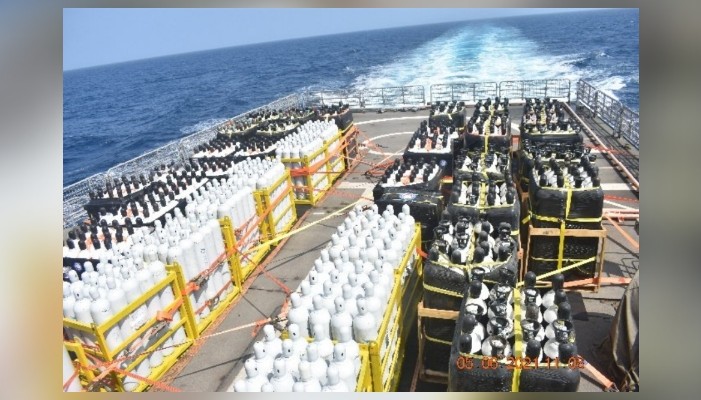 As part of the ongoing Operation 'Samudra Setu II' to support India's fight against coronavirus, the Indian Naval Ship (INS) Tarkash on Tuesday arrived in Mumbai with critical medical supplies from Kuwait and Saudi Arabia.

According to a statement by the Ministry of Defence, INS Tarkash entered Al Shuwaikh Harbour, Kuwait on May 31 and embarked 785 oxygen cylinders. Later on, the ship embarked 300 oxygen cylinders from Ad Dammam Port, Saudi Arabia on 01 Jun 21. She entered Mumbai Harbour with medical consignment on the morning of June 8.

Earlier on May 12, the Indian Naval Ship Tarkash had brought 2 containers with 20 metric tonnes of liquid medical oxygen each and 230 oxygen cylinders to Mumbai from Qatar.

As the demand for oxygen in the country surged amid the Covid-19 situation, the Indian Navy deployed its various ships to import oxygen and other medical equipment to the country under operation 'Samudra Setu II'. The oxygen containers were provided by France under its mission 'Oxygen Solidarity Bridge' and the cylinders were gifted by the Indian diaspora in Qatar.

The consignments are offloaded at Visakhapatnam (Andhra Pradesh), Mumbai (Maharashtra) and New Mangalore port (Karnataka) on a regular basis for the last few months.

India plans to import 50,000 metric tonnes of medical oxygen to cater to the rising demand. The Union Ministry of Health and Family Welfare is in the process of floating a tender for the import of medical oxygen.