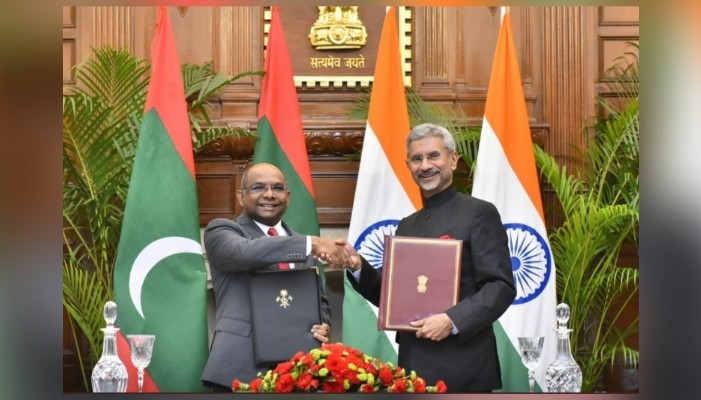 Calling it a testimony as much to his own stature as to the standing of Maldives, External Affairs Minister S Jaishankar has congratulated Foreign Minister of Maldives Abdulla Shahid on his election as the President for the 76th UN General Assembly on Monday.

Jaishankar said India looks forward to working with him to strengthen multilateralism and its much needed reforms.

“Heartiest felicitations to Foreign Minister of Maldives @abdulla_shahid on his election as President for 76th UN General Assembly,” the EAM said in a tweet.

“This is a testimony as much to his own stature as to the standing of Maldives. We look forward to working with him to strengthen multilateralism and its much needed reforms,” he added in reply to the earlier tweet.

India along with several UN members backed Shahid's candidature, thereby, making him win the prestigious post with an overwhelming majority.

The President of the UN General Assembly is the highest office in the UN system, and reflects the collective goodwill of the 193 member states of the UN.

This is a post held on an annual basis, rotated amongst various regional groupings. The 76th session (2021-22) is the turn of the Asia-Pacific group.

Foreign Minister Shahid is eminently qualified to hold the office of the President of the UN General Assembly, with vast diplomatic experience and strong credentials, especially in the multilateral fora.

India announced its support for Foreign Minister Shahid during the visit of Foreign Secretary Harsh Vardhan Shringla to Maldives in November 2020. Even at that time, he was the only candidate in the fray.

In mid-January 2021, in a surprising development and with less than 6 months before the elections, Afghan Foreign Minister Zalmai Rassoul entered the fray, people familiar with the development said.

While Foreign Minister Rassoul also has strong credentials, by the time his candidature was announced, Maldives had already garnered extensive support.

Moreover, Maldives has never held the office of the President of the UN General Assembly, while Afghanistan has held this post during the 21st GA session in 1966-67.