'By conducting policies as per UN Charter, we can bring about change we desire’: S Jaishankar at BRICS Foreign Ministers’ meet 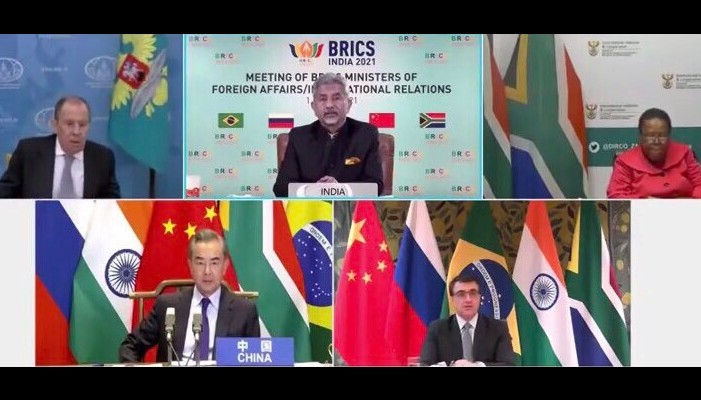 While chairing BRICS Foreign Ministers’ meeting in a virtual format, External Affairs Minister S Jaishankar on Tuesday said that it is only by conducting policies in accordance with international law and the UN Charter that recognizes the sovereign equality of all states, and respect their territorial integrity that “we can expect to bring about the change we desire.”

“We strive for a fair, just, inclusive, equitable and representative multipolar international system. It is one based on international law and the UN Charter that recognizes the sovereign equality of all States, and respects their territorial integrity while displaying mutual respect for interests and concerns of all,” the EAM said in his opening remarks at the BRICS Foreign Ministers’ meeting.

Over the years, he said BRICS has evolved its own unique model of engagement that is based on consensus.

“Our collective endeavour is also to ensure that global decision-making reflects contemporary realities. To this end, we have identified four key deliverables for our Chairship - Reform of the Multilateral System, Counter Terrorism Cooperation, Using Digital and Technological Solutions to achieve SDGs, and Enhancing People to People Cooperation,” the EAM added.

BRICS brings together five of the largest developing countries of the world, representing 41% of the global population, 24% of the global GDP and 16% of global trade. As such, BRICS has emerged as a useful platform for consultations on a range of issues of common interest touching upon issues of political, economic and cultural cooperation.

BRICS Foreign Ministers first met in 2006, and the first BRICS Summit was held in 2009. Over the past fifteen years, the scope of BRICS has steadily expanded to include deliberations and exchange of views on strategic issues such as counter terrorism and cyber security as well as identification of new areas of practical cooperation such as health, education, science and technology and disaster management and resilience.

BRICS has proved to be a useful platform for having detailed discussions and deliberations on issues of concern for the developing world.

As the group’s flagship project, the BRICS New Development Bank has been a resounding success in providing a development oriented bank catering to the Global South.

New Development Bank (NDB), the flagship outcome of BRICS continues to fund projects in infrastructure and sustainable development. Till date, 76 projects worth over USD 28 billion have been approved by NDB in BRICS countries.

Of these, 18 projects worth USD 6.9 billion have been approved in India. This includes a loan of USD 2 billion under the Emergency Assistance Program in Combating COVID-19 to support the Indian government in fighting the COVID-19 outbreak, and reduce human, social and economic losses.

India sees BRICS as an important platform to prioritize the ‘development paradigm in the global policy discourse. The pandemic has pushed millions back into poverty and disrupted the progress made on the SDG-2030 agenda.

Recognizing the urgency, India will use its Chairship this year to come up with practical measures with its BRICS partners on harnessing digital and technological tools and solutions to meet SDG goals- be it on health, poverty, hunger, education or infrastructure.

There is a convergence of interests amongst BRICS on these issues which can be used to build support for this narrative on a larger global canvas.

BRICS Foreign Ministers started meeting in standalone format since 2017 (Beijing), and India has hosted the 5th such meeting.

The agenda for the meeting includes deliberations on Covid-19 situation, global and regional issues of importance, and intra-BRICS cooperation.

Ministers may discuss finalization of outcome documents at the meeting. The rotating BRICS Chair passes on to China in 2022.