As the UN honours Indians, a look at the country's illustrious role in peacekeeping 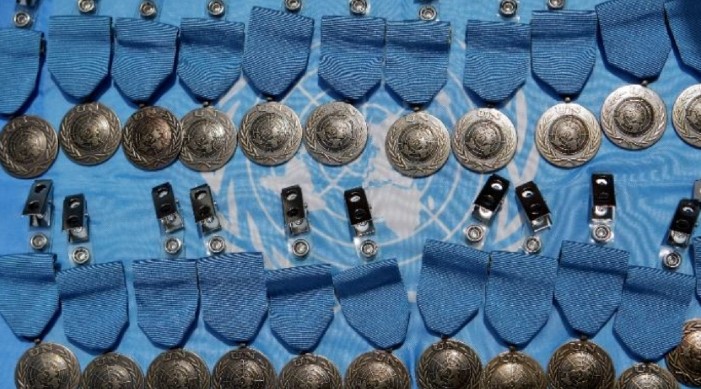 Three Indians have been honoured posthumously with the Dag Hammarskjold Medal.

Recognizing their supreme sacrifice in the line of duty, the United Nations on Thursday posthumously honored three Indian peacekeepers who laid down their lives while serving in UN missions last year.

Corporal Yuvraj Singh, who served with the United Nations Mission in South Sudan (UNMISS) and two civilian peacekeepers - Ivan Michael Picardo, who served with UNMISS, and Mulchand Yadav, who worked for the UN Assistance Mission in Iraq (UNAMI) - were honoured posthumously with the Dag Hammarskjold Medal on the occasion of the International Day of United Nations Peacekeepers.

Last year too, five Indian peacekeepers who laid down their lives in the line of duty were among 83 military, police and civilian personnel to be honoured with a prestigious UN medal posthumously.

India has a long and illustrious history of peacekeeping.

The country is also the largest contributor to UN peacekeeping in the past 70 years as highlighted by External Affairs Minister S Jaishankar in a virtual seminar last month.

India’s contributions to UN peacekeeping operations has been underscored by the experience and professionalism of India’s armed forces, he mentioned.

“The exemplary demeanour of Indian soldiers in World War I, on and off the battlefield, has set us on the long road to peacekeeping. With 50 missions and 253,000 soldiers in addition to police personnel, India has been the largest contributor to UN Peacekeeping,” the Minister had remarked.

Noting that the standards with which the Indian military is associated with at home and abroad has its history, the EAM recalled that Indian soldiers were motivated during the World War I, neither by conquest nor acquisition, their driving force was in fact a military ethic, honour and dignity of the profession.

Indian peacekeepers have served in UN peacekeeping missions around the world.

Currently, more than 5,500 military and police serving in peace operations in Abyei, Cyprus, Congo, Lebanon, the Middle East, Somalia, South Sudan and the Western Sahara, according to the UN.

Blue helmets from India have proven their worth in protecting civilians and supporting peace processes, and also by carrying out specialist tasks. They have served in some of the most physically demanding and harshest environments, including South Sudan.

UN peacekeepers from India continue to help local people and communities with a range of services including providing disaster relief, free medical care, and veterinary expertise.

Doctors from the country have provided medical care to the local population in missions around the world, including in the Democratic Republic of the Congo.

Indian veterinary doctors have also sometimes been deployed as part of the peacebuilding process.

In Eritrea, Indian engineers helped to rehabilitate roads as part of the UN Mission in Ethiopia and Eritrea (UNMEE).
Peacekeepers have also brought the ancient Indian practice of yoga to UN missions.

India has a long tradition of sending women on UN peacekeeping missions.

In 2007, India became the first country to deploy an all-women contingent to a UN peacekeeping mission. The Formed Police Unit in Liberia provided 24-hour guard duty and conducted night patrols in the capital Monrovia and helped to build the capacity of the Liberian police.

“These female Indian peacekeepers stabilised the local community and inspired Liberian women to work in law enforcement,” according to a video posted on the official website of UN Peacekeeping, recognizing their efforts.

The role of Indian women peacekeepers were hailed by then President of Liberia and Nobel Laureate, Ellen Johnson Sirleaf, the video stated with a byte of the former head of state.

“The contribution you have made to inspiring Liberian women to imparting them the spirit of professionalism to encourage them to join those entities, those operations that protect the nation. For that we will always be grateful,” she can be heard saying.

In recognition of the contribution of women peacemakers from India or the first time, Major Suman Gawani was awarded the 2019 UN Military Gender Advocate of the Year Award, saying their "inspiring work" promotes equality in the forces.

In message to mark the International Day of United Nations Peacekeepers that will be observed on Saturday, UN Secretary General, Antonio Guterres called young peacekeepers, in particular young women peacekeepers, as one of UN’s greatest strengths.

“One of our greatest strengths is our own young peacekeepers, in particular young women peacekeepers who contribute every day to debunking deeply entrenched gendered stereotypes and inspire young women and girls to seek non-traditional paths and opportunities,” the UN Secretary General said in the message.