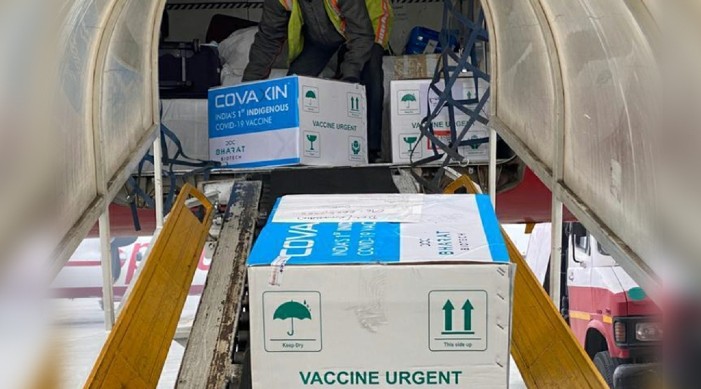 As India tries to subdue the second wave of the Covid-19 pandemic and the clamor to increase vaccination coverage grows, the central government has set an ambitious target to make over 2 billion Covid-19 vaccine doses available by December 2021.

The plan, announced by Member (Health) NITI Aayog VK Paul on May 13 as states grappled with a shortage of coronavirus vaccines, envisages that these two billion-plus vaccine doses will be made available in five months between August and December.

This would mean that there would be surplus doses still left after every eligible Indian was vaccinated.

What’s more, going by numbers cited by the government seemingly on the basis of projections by the vaccine manufacturers themselves, this figure could go up to three billion doses by the first quarter of next year.

This makes up a total of 216 crore (over 2 billion) Covid-19 vaccine doses by the end of the year.

This plan does look ambitious, considering that only Covishield, Covaxin and Sputnik V vaccines are approved for use in the country as of now.

However, here is how India actually could be on the right track.

An initial push was given to India’s ambitious plan by Bharat Biotech on May 20, as the company announced that it is going to ramp up the production capacity of Covaxin by 200 million more doses by the end of the year.

“The company plans to produce 200 million doses of COVAXIN per annum in the GMP facilities that are already operational for the production of vaccines based on Inactivated Vero Cell Platform Technology, under stringent levels of GMP and biosafety. Product availability at Ankleshwar to commence from Q4 2021,” a statement issued by Bharat Biotech said.

This effectively takes the volumes up to 1 billion doses per annum, with its own established campuses specialized for manufacturing inactivated viral vaccines under the highest levels of biosafety, the company pointed out.

In April, the Hyderabad-based company had increased the manufacturing capacity of its vaccine to 700 million doses per annum.

Company chairman Krishna Ella has said that if the center can develop a protocol for all phases of clinical trials, Bharat Biotech can bring the nasal vaccine to market by June 2021.

Under Mission COVID Suraksha, the central government has provided financial support to at least three public sector companies to increase the production capacity of Covaxin.

According to information made available by the Ministry of Science and Technology, Haffkine Biopharmaceutical Corporation Ltd, Mumbai has received a financial support of Rs 65 crore. A State Public Sector Enterprise under the Maharashtra government, the facility will have a capacity of 20 million doses per month, once it is functional.

Indian Immunologicals Limited (IIL), Hyderabad - a facility under the National Dairy Development Board (NDDB) - is being provided a grant of Rs. 60 crore.

Bharat Immunologicals and Biologicals Limited (BIBCOL), a Central Public Sector Enterprise in Bulandshahr under the Department of Biotechnology, is being supported with a grant of Rs. 30 crores. The target is for the facility to provide 10-15 million doses per month.

SII has also sought a grant of Rs 3,000 crore in order to ramp up that capacity beyond 100 million, targeted for by the end of May. It has written to NITI Aayog for Rs 1,000 crore out of the total Rs 3,000 crore for a dedicated Covishield production unit.

Earlier in the month, the CEO of SII Adar Poonawalla had assured that the production of Covid-19 vaccine Covishield is in full swing in Pune.

"Had an excellent meeting with all our partners and stakeholders in the UK. Meanwhile, pleased to state that Covishield's production is in full swing in Pune. I look forward to reviewing operations upon my return in a few days," Poonawalla had said in a tweet.

SII also aims to make 50 million doses of Covovax (the Novavax vaccine) per month at its Pune plant.

Sputnik V, which was recently launched in India, is estimated to be available from Indian manufacturers in the July quarter.

Recently, Indian ambassador to Russia DB Venkatesh Verma said that India will begin production of Russia’s Sputnik V vaccine against Covid-19 in August and will be producing 850 million doses. He has said that of the total Sputnik V vaccines in the world, 65-70% would be India-made.

Verma said that 150,000 plus 60,000 doses of Sputnik have been supplied to India so far. By the end of May, 3 million doses will be supplied in bulk. The supply of vaccines is expected to hit 5 million by June and the production of the vaccine in India is expected to begin by August.

"Sputnik will be produced in India in three phases. First, supply from Russia - fully made - which has already started. Second, RDIF will send to India in bulk. It will be ready for use but it will have to be filled in various bottles in India. Third, the Russian side will transfer the technology to the Indian company and the Indian company will produce it fully in India. All these three phases put together will be about 850 million doses," Verma was quoted as saying in St Petersburg.

The second batch of Sputnik V was delivered to India on May 16. Expressing his happiness at the delivery of the first batch of Sputnik V vaccine to India, Russian envoy to India Nikolay Kudashev had said that the local production is about to start soon and is planned to be gradually increased up to 850 million doses per year.

Sputnik V is the first foreign-made vaccine to be permitted for use in India. Backing the step of approving Sputnik V vaccine for emergency use, former Director General of Indian Council of Medical Research (ICMR) VM Katoch, in an email interview with India News Network, had said, “Sputnik vaccine has already been used extensively. I am sure that our regulator will assess the relevant safety and efficacy issues. We have established procedures to monitor the phase IV of introduction in the community.”

Other Vaccines in the pipeline

The center has signaled that four more vaccine manufacturers are in the pipeline, including Johnson & Johnson's vaccine (with Biological E), Novovax (with SII, as mentioned earlier), Zydus Cadila's vaccine and an intranasal vaccine by Bharat Biotech, besides the approval of foreign vaccines.

Along with this, the central government has fast-tracked emergency approvals for foreign-produced Covid-19 vaccines that have been granted Emergency Use Authorisation (EUA) in other countries. This has been done to expand the basket of vaccines for domestic use and hasten the pace and coverage of vaccination.

There are reports of potential vaccine supplies from foreign manufacturers like Pfizer and Moderna, once they have met their existing order commitments. The Indian government has confirmed that it is in touch with these pharma companies.