India will continue to shape big debates of “our times”: Jaishankar at strategy session in New York 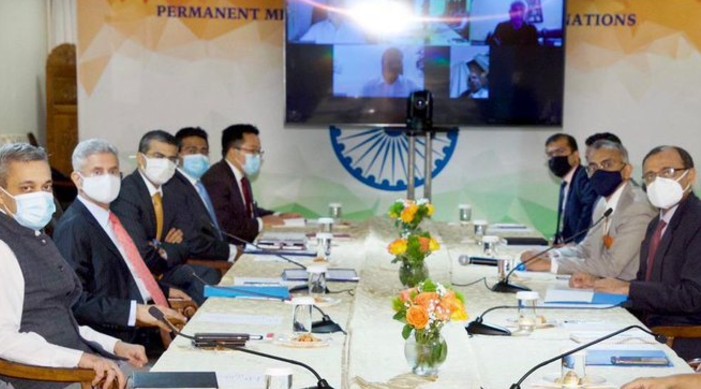 External Affairs Minister S Jaishankar on Tuesday held a productive strategy session with India’s Permanent Representative to the UN T S Tirumurti and his team members in New York ahead of his meeting with senior US officials.

Tweeting about it EAM Jaishankar wrote: “A productive strategy session with Ambassador Tirmurti and our UN team in New York. Confident that India will continue to shape the big debates of our times.”

In his second leg of the US visit, the EAM will land in Washington DC to hold discussion with Secretary of State Antony Blinken. It will be their second meeting in less than a month. On the sidelines of the G-7 Foreign Ministers’ meeting in London on May 4, Jashankar and Blinken had a meeting and both deliberated on ways to deal with the Covid-19 pandemic, situation in the Indo-Pacific and issues related to climate change.

During the meeting with the US Secretary of State, it is expected that the EAM will raise the issue of raw materials for vaccines. Production of Johnson & Johnson vaccine in India is also likely to be discussed. A decision to this effect was taken at the first Quad leaders’ summit in March, 2021.

In the course of his five-day US visit, the EAM will also be meeting Cabinet members and Senior Officials of the Administration dealing with the bilateral relationship.

EAM Jaishankar will have two interactions with business forums on economic and Covid-19-related cooperation between India and the US.

On Sunday, an alliance of Israel’s eight parties joined together and ousted Benjamin Netanyahu, the country's longest-serving Prime Minister