At UNSC, India calls for comprehensive approach for safety and security of peacekeepers 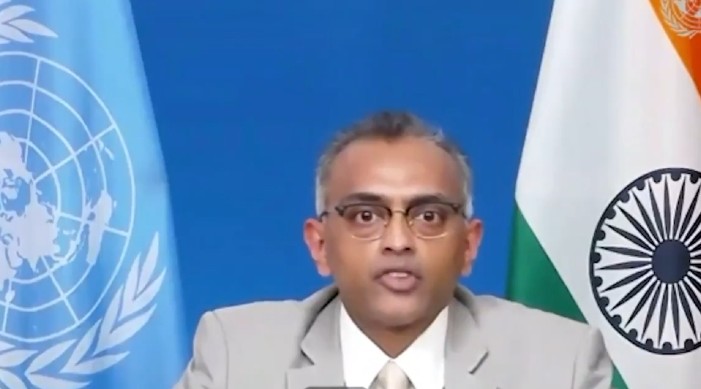 Noting that the issue of safety and security of peacekeepers requires a comprehensive approach and concerted efforts by all stakeholders involved, India at a United National Security Council (UNSC) debate on Monday called for looking at the issue both holistically and in a sustained manner.

“We need to look at the issue both holistically and in a sustained manner. India, in keeping with its time tested credentials and commitment to UN Peacekeeping would never be found wanting in this regard,” said India’s Deputy Permanent Representative to the UN, K. Nagraj Naidu.

Speaking at the UNSC Open Debate, ‘Peacekeeping Operations: Improving safety and security of peacekeepers’, Naidu drew attention of the Council to the increasing casualties of UN peacemakers over the years.

“UN peacekeepers operate in a complex security environment involving armed groups, non-state actors and terrorists. The ever-expanding mandates of peacekeeping missions with limited resources has only added to the challenges and complexities that peacekeepers face on the ground,” he stated.

Pointing out that the strategy of peacekeepers needing to do more with less, is setting us all up for a potential crisis, Naidu noted that the fallout of such a strategy is glaringly evident in the increasing casualties over the years.

“These challenges are compounded further by the increasing use of improvised explosive devices (IEDs) by terrorists and armed groups against peacekeepers. The blue helmets, who are currently operating in 13 peacekeeping missions, are under tremendous pressure,” he warned.

Emphasising that “Protecting the Protectors” should be our primary objective, Ambassador Naidu informed that more than 260 peacekeepers have died due to malicious attacks since 2013.

Making suggestions for the Council’s consideration, Naidu urged for putting an end to the tendency of burdening peacekeepers with responsibilities which ought to primarily lie with the host state or other relevant international organisations.

He said while a number of initiatives have looked at Improvising Explosive Devise Disposal (IEDD) measures in the field, we are of the view that this problem needs more attention.

Ambassador Naidu suggested that missions facing IED threats should have dedicated resources to counter this particular threat and the training of UN personnel on IED threats, both in-country and prior to deployment, needs to be more context specific.

He stressed upon the need for concerted efforts to upgrade the security infrastructure of camps of UN peacekeepers as a number of casualties have been related to direct attacks on security camps.

Terming timely and reliable medical evacuation and casualty evacuation, including the use of helicopters with night flight capability and night retrieval operations as essential, Naidu said Force Commanders should be given the direct authority for commanding such air assets to respond in a timely manner to crisis situations or accidents.

Stressing upon that peacekeepers need to be provided full access to medical facilities, in accordance with the golden hour principle, throughout the mission area, he reiterated India’s pledge of a helicopter unit for MINUSMA.

“We have also upgraded our medical facilities at MONUSCO (Goma) and UNMISS (Juba),” he mentioned.

Of the belief that infusion of appropriate technology can play significant role in improving the safety and security of the peacekeepers, Ambassador Naidu called for the use of field-focused, reliable and cost-effective new technologies in peacekeeping operations that are driven by practical needs of end users on the ground is the need of the hour.

He informed the Council, in this regard, India in partnership with UNDPKO Department of Operational Support has been has working towards development of mobile tech platform – UNITE AWARE.

India has contributed US$ 1.64 million toward the project that seeks to develop mobile tech platform that helps increase situational awareness and provides terrain related information to peacekeepers, the Indian representative added.

Calling the training of UN peacekeepers as an essential and strategic investment in peacekeeping, he informed the Council that India’s Centre for UN Peacekeeping (CUNPK) is looking forward to signing an MOU and partnering with the C4ISR Academy for Peace Operations (UNCAP) to prepare training modules on a range of capabilities.

Besides taking preventive measures to improve the safety and security of peacekeepers, it is also imperative to bring the perpetrators who committed heinous crimes against them, to justice, India’s Deputy Permanent Representative said.

“This needs collaboration and coordination between different stakeholders, including the UN and the host countries where the peacekeepers are deployed and extending assistance to countries who need help to frame these legislations,” he suggested.

On Sunday, an alliance of Israel’s eight parties joined together and ousted Benjamin Netanyahu, the country's longest-serving Prime Minister

Kenya has a thriving community of persons of Indian origin presently numbered around 80,000, including an estimated 20,000 Indian citizens