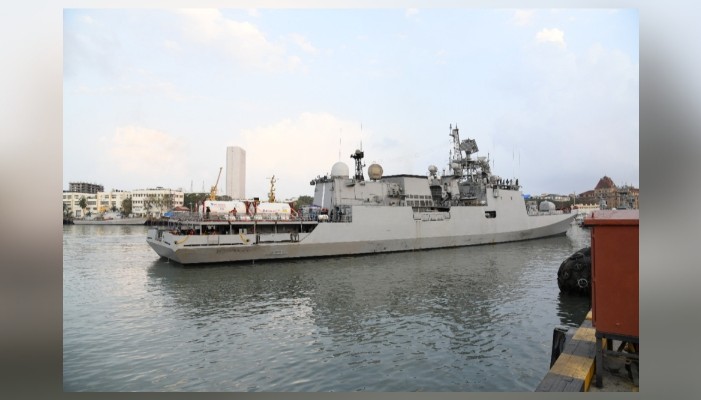 Even as the ferocity of the second wave of Coronavirus, which wreaked havoc in April and the first week of May in India, has started ebbing, the country is sparing no effort to ramp up health-related infrastructure. Simultaneously, Covid-19 relief material supplied by different countries is also suitably used, matching with their demands across the country.

On Sunday, INS Trikand arrived at Mumbai with two Liquid Medical Oxygen (LMO) containers of 20 MT each and 100 oxygen cylinders from Qatar. This was brought by the Indian naval ship under its ‘Samudra Setu II operation.

On the other hand, INS Jalashwa has arrived at Visakhapatnam with critical Covid-19 relief consignment including oxygen cylinders and ventilators from Brunei and Singapore.

The Covid-19 relief materials including oxygen containers and ventilators were facilitated by the Indian Missions and the consignments are being handed over to Government agencies in various States and NGOs.

As per the Ministry of Defence, even as Indian Navy remains deployed to augment the critical medical stores in the nation's ongoing fight against COVID-19, Indian Naval Ships Teg, Betwa, Subhadra, Makar, Tarasa and 07 ISVs apart from naval helicopters and aircraft relentlessly continue with their SAR efforts off the West coast of India in wake of the sinking of Barge P305 in ODA due to havoc wreaked by Cyclone Tauktae.

In support of the nation’s fight against Covid-19 and as part of operation 'Samudra Setu II’, seven Indian Naval Ships like Kolkata, Kochi, Talwar, Tabar, Trikand, Jalashwa and Airavat have been deployed for shipment of liquid medical oxygen-filled cryogenic containers and associated medical equipment from various countries.